(Feb 5, 2023) The end of the End Time
Jesus: “Those who are awake and pray when I come will know when I will come!”
Pastor Sori Park (South Korea)
Pastor Brani Duyon (mei 2006) Borneo Evangelical Church, Kota Belud, Sabah. (East Malaysia)
Jesus: “Tell My children that they must be ready and alert, for I will soon come. Sooner than people expect! “

It is easy to count with the reference of the visions “August 2018” and “Fiche 59”. But what is also important, is the date of birth of the false Prophet/Antichrist.

Birth Antichrist made known
The birth of this ‘Superhuman’ was made known to the world through the book ‘A gift of profecy’: “…a child born somewhere in the Middle East as a Jew on “February 5th, 1962”  will bring about a turnaround in the world.”
In the second half of 1965 already, this book saw11 reprints in America, while ‘Reader’s Digest’ also contained an excerpt in an edition of 25 million copies and in 14 languages. In many prophecies the Lord has confirmed that this child, born on Feb 5th, 1962, is indeed the Antichrist to be expected.

See overview of the times:
After the white horse every five months later another horse

The first horseman on the white horse is for the Jews the Messiah. But for the Christians he is the false Prophet, the forerunner of the Antichrist.
Five months fore the false Prophet:
(23-31 March 2018 until the end of 23-31 August 2018)
(Revelation 6:1-2) “Then I saw when the Lamb broke one of the seven seals, and I heard one of the four living creatures saying as with a voice of thunder, “Come.” [2] I looked, and behold, a white horse, and he who sat on it had a bow; and a crown was given to him, and he went out conquering and to conquer.”

At the end of the first 3.5 years (false peace) he will only rule for 5 months. The second time of another 3.5 years (Armageddon) refers to the other three horsemen.

(Revelation 6:3-4) “When He broke the second seal, I heard the second living creature saying, “Come.” [4] And another, a red horse, went out; and to him who sat on it, it was granted to take peace from the earth, and that men would slay one another; and a great sword was given to him.”

(Revelation 6:5-6) “When He broke the third seal, I heard the third living creature saying, “Come.” I looked, and behold, a black horse; and he who sat on it had a pair of scales in his hand. [6] And I heard something like a voice in the center of the four living creatures saying, “A quart of wheat for a denarius, and three quarts of barley for a denarius; and do not damage the oil and the wine.”

The fourth horseman with the sickle on the pale horse:
(June 2019 until the end of Sep 2021)
(Revelation 6:7-8) “When the Lamb broke the fourth seal, I heard the voice of the fourth living creature saying, “Come.” [8] I looked, and behold, an ashen horse; and he who sat on it had the name Death; and Hades was following with him. Authority was given to them over a fourth of the earth, to kill with sword and with famine and with pestilence and by the wild beasts of the earth.” 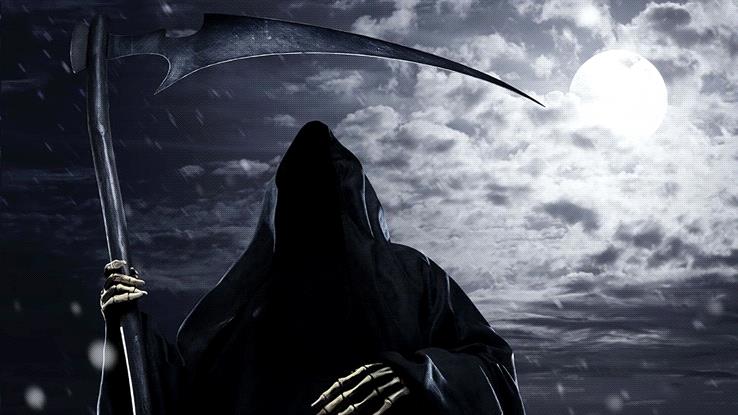 Grim Reaper with the sickle in his hand. He needs this to be able to cut through “The Silver Cord” from the more than 300 million Christians at their execution.

Initially I had calculated 200 million people, but Jesus told me that it is 300 million.

Grim Reaper and a Christian of God

Only a true Christian of God, who has died, sees the Grim Reaper coming towards him. The Grim Reaper is a person, a skeleton from Hell, who in a pale robe of death represents ‘Death’. He has a sickle in his right hand with which he, within one second, at the death of a Christian, cuts through the silver Cord of life. The soul is then no longer connected to that body.

From the one who does not belong to Jesus, his soul remains connected to the dead body for exactly 72 hours (three days) and during that time will still feel everything that is done with that body. Many will now see how important the Grim Reaper is in the Valley of Armageddon! 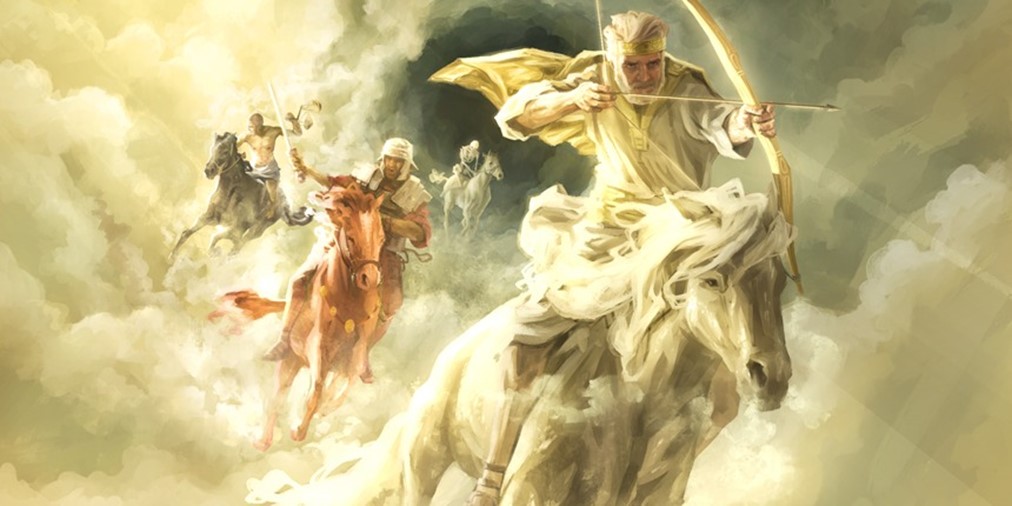 The four horses of Armageddon

The Rabbis and their Messiah
Because the Messiah did not reveal himself in Nov./Dec.2017, the Rabbis now think that the date will be Nov./Dec.2018. But according to the vision of “August 2018” it will be at the end of March 2018.

With God the Father, a generation is exactly 70 years. The countdown began on 14 May 1948 with the creation of the State of Israel for the Jews and ends officially in May 2018.

(Revelation 13:2) “And the beast which I saw was like a leopard, and his feet were like those of a bear, and his mouth like the mouth of a lion. And the dragon gave him his power and his throne and great authority.”

The Power of the Antichrist
(Daniel 7:25) “He will speak out against the Most High and wear down the saints of the Highest One, and he will intend to make alterations in times and in law; and they will be given into his hand for a time, times, and half a time.”
This verse refers to the Antichrist. Because when Satan (Lucifer), after three days, through a “Walk-in” brings the dead body of the false Prophet back to life and takes it over, Satan is as a human in the world in all his strength!* (Revelation 13:12) “…whose fatal wound was healed.”
___
*) (Revelation 13:12) – (12a) “He exercises all the authority of the first beast in his presence. [12b] And he makes the earth and those who dwell in it to worship the first beast, whose fatal wound was healed.”
Verse (12a) …for his eyes from… – These eyes are from Satan.
Actually it should say: “And he [Satan] exerts all his power from the heavenly places on to the first Beast, the false Prophet.”
(12b) “And it results that all the people who live on the earth will worship the first Beast who was killed and whose fatal wound was healed and who resurrected.”
___
See: “Two Characters in one Body”
The mystery 23rd of Sep 2017 hidden in a crop circle.

The 1000-year Kingdom of Peace is the seventh day.

Jesus: “When people are going to be digitally controlled, there is no point in letting people live much longer.”

The coming of the Lord
With the vision of ‘August 2018’, the Lord has given me not only the year, but also the month of the Rapture. But we can not determine the day nor the hour. That is impossible!
(Matthew 24:36) “But of that day and hour no one knows, not even the angels of heaven, nor the Son, but the Father alone.”

The Lord is only talking about the day and the hour, not about a month or year. Otherwise I would not have received the vision of “August 2018”.

Jesus: “Time is already up!” 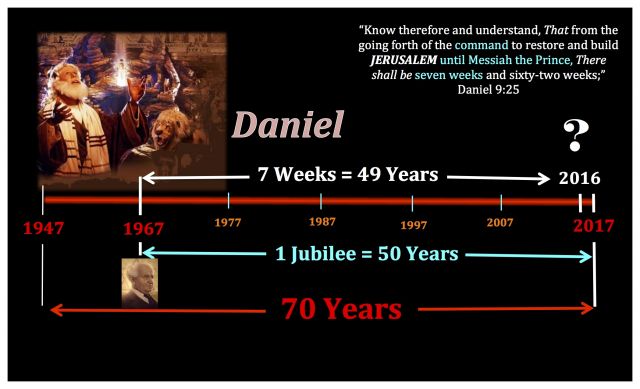 With God the Father, a generation is exactly 70 years

The Fig Tree
Birth of the State of Israel was on May 14, 1948 +70 years = 2018.
(Matthew 24:32-34) “Now learn the parable from the fig tree: when its branch has already become tender and puts forth its leaves, you know that summer is near; [33] so, you too, when you see all these things, recognize that He is near, right at the door. [34] “Truly I say to you, this generation will not pass away until all these things take place.”

See details: “TIME IS RUNNING OUT FAST!!!”  One generation is 70 years!

The false Prophet
The Rabbis of Israel had their Messiah expected in Nov./Dec.2017 and now assume that Nov./Dec.2018 will be the year of their Messiah. Then a generation would be 71 years.
But the visions I received from Jesus show a different picture. Namely that the false Prophet will reveal himself at the end of February or at the latest in March 2018. The Rapture will then take place in the last week of August 2018.

Brothers and sisters, if I see this vision, then I assume that August 2018 has to do with the Rapture. A vision, so complicated, that I could not have invented it.

According to the visions, the Rapture will take place in August 2018!
After the birth of Jesus, Jerusalem was razed to the ground 70 years later.

The Jewish calendar with the current western time

This overview indicates that the Lord will not return until Sep 2022 and that the 1000-year kingdom of peace will begin by then. The world time can easily be read from it, also from the Jewish calendar. But according to the visions that I received from the Lord, it will be already in Sep 2021!

Everything indicates that the time is already up
June 2021 end of Armageddon.
Sep 2021 the death of the Antichrist at the coming of Jesus on the Mount of Olives.

It is Obvious now, that 2018 will indeed be the year of the Messiah. Otherwise, these three visions must be re-examined and the arrival of the Messiah and the beginning of the 1000-year Peace Kingdom must all be changed on the Torah calendar (6000) and also on the timeline of Israel (5778).

The Rabbis of Israel assume that the 1000-year Peace Kingdom will not start until Sep 2022. This date is indicated in their calendar. If that is indeed the case, then the false Prophet will reveal himself in March 2019 and not in March 2018. And… brothers and sisters, I hope they are right, because the church is far from ready for the Rapture.

The Red Horse of Armageddon