“The Rapture One Billion” 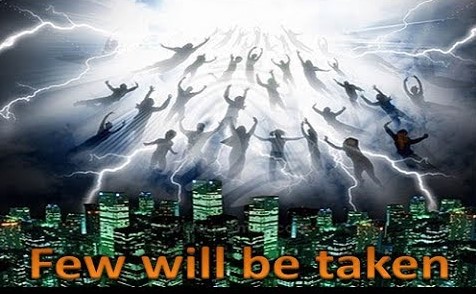 From the Church of Laodicea only 3%

.
Times have been adjusted
Timetable is ready

Nobody wants to stay behind
Brothers and sisters, Christians come to me because they do not believe their own pastor anymore! He tells them over and over again that the whole congregation (100%) will be raptured while the Christians, the little ones who live in the 1st degree of knowledge, do not believe it anymore.
.
These little ones have read the report “The Rapture only for a few”. They have been completely shocked and have become aware that they might stay behind. Because out of the current Church of Laodicea only 3% will be taken up!
Immediately I tell them how important it is to collect knowledge. Make sure you belong to the wise virgins as they have the knowledge in the 2nd and 3rd grade!
see: Children with knowledge in the 2nd and 3rd degree! – (Dutch)
(1 Cor.12:31) “But earnestly desire the greater gifts. And I show you a still more excellent way.”

Situation of Christians today
See what the Lord said about this:
Jesus: “Of all Christians 40% are mentally dead, 30% are mentally absent and form the remaining 30% only few are taken.”
The Pastor can only do his very best for the remaining 30%. It so becomes clear that only a few Christians of this group shall be taken up. When I told this to a Pastor, he had to admit that half of his church is asleep and many others are not or hardly interested, and also many others are busy with their phone. Many come for the cosines.
Throughout the week, during Bible study, only a few are present.
Before the Great Revival shall burst out, the Church of Laodicea has practically fallen asleep. It has become a sleeping congregation. 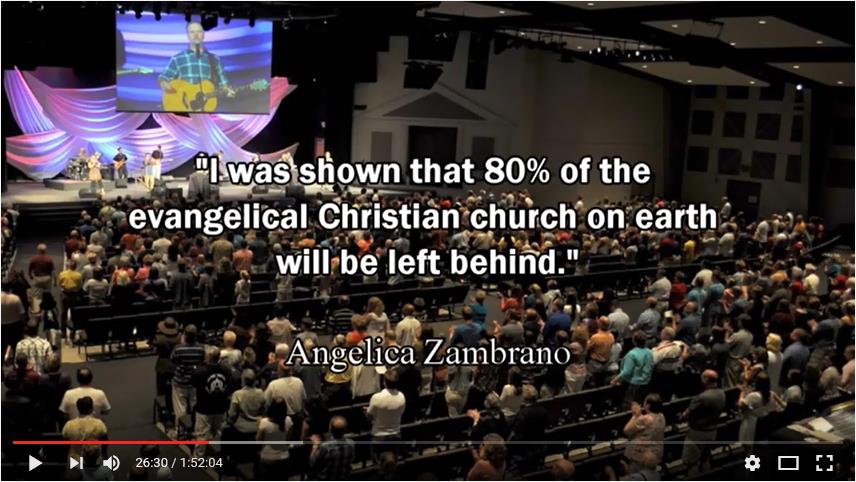 Only 20% will be taken in the rapture

This Great Revival will begin from July/Aug 2021 and, within one week starting from America, shall pass throughout the whole world. When the Rapture will take place in April 2022, everybody shall have heard of Jesus within these eight months.

Many people believe
But with faith alone, you have not yet passed Satan, because Satan also believes.

Know then what a great knowledge the wise virgins possess, surely!

Even less than the foolish virgins
(Hosea 4:6) “My people are lost by the lack of knowledge.”

Many Christians do not have the right knowledge. Anyone who lives and acts in the 1st degree of his tolerance does not belong to the foolish virgins. Their level is even lower. No knowledge at all is found in the 2nd and 3rd grade.

The foolish virgins do have this knowledge but do not carry it out. In one way or another they just do not want to tell others about what they know and that that makes it that they belong to the foolish virgins. They keep everything to themselves

Brothers and sisters, I have had many dreams, many visions. And what I saw is something you do not want or like to hear. Especially many Pastors prefer to know nothing about it. I saw that there were literally few that were taken up.
And suddenly there was the Rapture. Then everything happened as in a flash. I saw a hail of fire raining down on the Earth and there was a great earthquake. An earthquake that the world has never seen before, it was really horrifying. And many remained behind, those who in the world were the elite among the Christians.

See, a statement from the Lord referring to the Rapture.
Jesus: “From all churches and communities there will only be a few, who are then found to be worthy of being taken away to the Father’s house, without seeing death.”

Source: Louise Buchmann (Switzerland) “What the Lord showed me and let me hear” (page 27)

The Church of Laodicea
From the many Christians who have fulfilled the underwater baptism as the first obedience to God, only a handful of them will be taken.
The Lord clearly refer to the present Church of Laodicea, as it is today. For after all, with the Great Revival, the angels of the Lord bring in a large crowd of 1,2 billion Christians from which the Holy Spirit can only take 300 million. The other 3 million come forth from the actual Church who already for years have had an actif life of ministering. A total of more or less 300 million righteous Christians plus another 720 million people will be taken up. That make a total of 1,020 billion

How much time do we have?
Jesus: “Time has already elapsed. Time is up! The lines are already drawn. I know who are mine and who not. However, dear ones, you must prepare yourself so that you can hear the call of the Shofar (horn).”

Additional note
When, in the report “Silence before the Storm” I added a small part under “Events that will take place soon” Jesus gave me to understand the following:

Jesus: “I will take up a little more than one billion people.”
I was stunned! The Lord gave me the number, how is it possible.
With just over one billion, I assume that it will be about 1,020 billion people.
I have tried to adjust my former calculation of 920 million. But I cannot, because I would not know where to start. Where do those other 100 million people come from? I think this should be calculated proportionately. At first I had calculated 170 million but immediately Jesus made me know that it should be 300 million instead of 170 million.

About four months later, after I had placed the report “But in vain they Worship Me” on the website, Jesus gave me this number of a little more than 1 billion on Sunday (11-06-2017) exactly at 23:00 hour.

Brothers and sisters, do you have any idea who all of these are?
See the following:
All in all will be taken: out of one billion from the Church of Laodicea only 3 million and of the 1,2 billion of the Great Revival 300 million new wedding guests, 600 million children from 0 to 7 years old (these are all children of innocence) 20 million children from 7 to 12 years old (these children are sanctified by their faithful parents) and worldwide another 100 miljoen severely disabled and children with down syndrome of all ages. Jesus, gave me this last amount of 100 million because I did not know this.
(3+300+600+20+100)= Total 1,020 million people* who shall participate in the Rapture.
That is a little more than 1 billion.
___
*) With people are understood, big and small, and even what is in development in the mother’s belly! Total ±1,020 billion. In exactly the same way, the Lord passed the year and even the month to me of the last Bride and the last Oalim with which the End Time is now almost finished.

The last Great Revival
On Earth both angels and Sons of God are born. More and more worldly people are coming to insight and conversion. There are really many tens of millions and they become more and more. But becoming Sons of God, that number increases less and less!
Therefore God the Father is looking forward to see His last two Sons, who still have to be Born again of the spirit, and that is in fact the waiting for. After that Armageddon breaks out!
___

See details of this last Son of God the Father!
“The Last Benjamin” – (The Mystery of Winter and the Sabbath)
“The Sons of God” – (The road to Spiritual Rebirth – Part 1) – (Dutch) 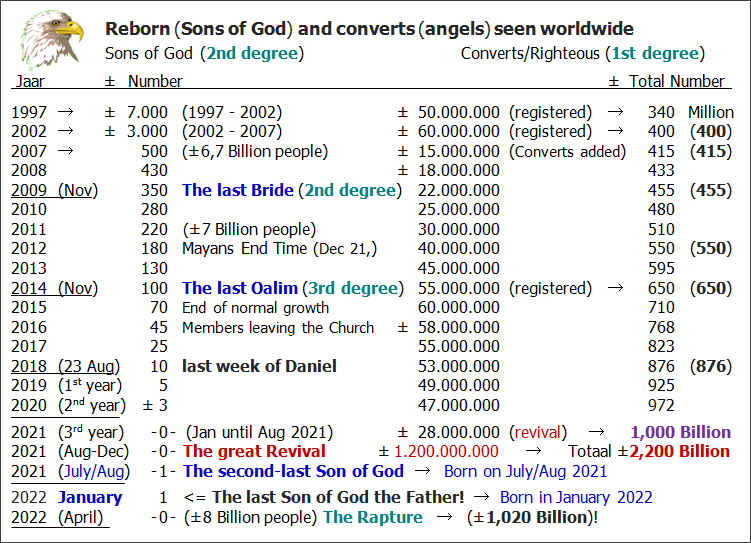 The following is very remarkable
The Lord has given me not only the year, but also the month with the End-time vision of the Rapture! Just like that of the Bride and the Oalim. That is very special.

Look now at the year 2009! The last Bride. Initially, I thought that the level of the last Bride had been closed in 2012, because that is what I mentioned. But the Lord made me know that this was already in November 2009. Surprisingly, the Lord also gave me the month of that year… november(!) 2009. And what do you think about the closing of the level of the last Oalim. The year 2014 I wrote correctly. But then again the Lord gave me the month… november(!) 2014. The month I did not know. The year alone would already have been good.

Have you also noticed the time?
From Nov 2009_ (Bride) to Nov 2014_ (Oalim) is exactly 5 years and the last Benjamin is born 8 years and 2 months later in Jan.2022. It will then take another 3 months before the Rapture will take place in April 2022. We are by then already in the second half of the last Week of Daniel!
Armageddon (Jan 2022 – June 2025)
Official end of Armageddon Sept 2025 with the return of Jesus on the Mount of Olives.

See details: How much time do we have left?

The first 48 hours immediately after the Rapture

What will happen when the Rapture takes place?
Within 48 hours(!), Satan will kill just over a billion people, who belong to him, in their sleep. This happens a few seconds after the Rapture has taken place. Almost immediately afterwards the greatest earthquake ever will occur, such as the world has never known before.
At the same time there will be an unprecedented Tsunami of about 100 to 200 meters high! Hundreds of millions of people will be killed by these two disasters.
(Around 735 million people live worldwide at sea level!)
___
*) What will be achieved with this is, that very many will not go for the Burn Mark(666). Because of these very large disasters, many (mostly elderly) people will have died beforehand, before they will be forced to accept the Burn Mark (666).
See: Armageddon – (The first 48 hours) – (Dutch)
(The night) The moment of the Rapture

(All people will be possessed!)

I saw this image in Aug 1990. Jesus has taken His own and Satan, what is his. Remains 6 billion. One can hardly imagine this. Within a few years, another ¼ part (1,5 billion) people will be eradicated (Rev 6:8). This as a result of wars, epidemics and the collapse of society. Remains 4,5 billion. All these things will be a natural reaction to the war in the Middle East.

The world is filled with horror!

Of the remaining 4,5 billion, eventually, between 40 and 50 million will survive Armageddon. All of these lucky ones do somehow not have the Laser- Burn Code Sign/Logo (666).
(Daniel 12:12-13) “Blessed is he that waiteth, and cometh to the thousand three hundred and five and thirty days. But go thou thy way till the end be: for thou shalt rest, and stand in thy lot at the end of the days.”
Satan has not been able to get hold of this small group.
See: The Biochip is not the Mark
===*===
All texts are from the James King and the New American Standard Bible (NASB)

The Rapture One Billion