See new chart: “The false Prophet in the End Time”

(The mystery of the five months)

According to the vision of August 2018 something has to happen and in my opinion that should be the revelation of the false Prophet. I can not think of any other option, because the time is already up and all visions end in August 2018!

All I can give you now is that the great Revival will last for five months and then the false Prophet will be killed. The whole world will be in mourning. But then, on the third day, the false Prophet suddenly rises again. Only, at that moment a “Walk In” took place.

Body, soul and spirit
After the death of the false Prophet, it takes exactly 72 hours before the soul is separated from the body. Only then is the body free from soul and spirit! Satan sees that and takes possession of that body that was once of the false Prophet. The whole world rejoices with the sight of this resurrection and knows no better than that the false Prophet has been restored of his deadly wound.* But… now Satan (Lucifer) lives in that body!
___
*) (Rev.13:3) “I saw one of his heads as if it had been slain, and his fatal wound was healed. And the whole earth was amazed and followed after the beast…”

(Rev.13:12) “He exercises all the authority of the first beast in his presence. And he makes the earth and those who dwell in it to worship the first beast, whose fatal wound was healed.”

The false Prophet should have been known five months before the revelation of the Antichrist. Maybe that is true, but the Jews still do not recognize him. In any case, August 2018 should be the month and year of a global event. The announcement can not take that long anymore.

The Church of the Lord and the Dragon

On Sept 23, 2017, the position of the stars showed an image that corresponds fairly to Rev.12:1-2 and 4b: “A great sign appeared in heaven: a woman clothed with the sun, and the moon under her feet, and on her head a crown of twelve stars; 2and she was with child; and she cried out, being in labor and in pain to give birth. [4b] And the dragon stood before the woman who was about to give birth, so that when she gave birth he might devour her child.”
___
These verses refer to the birth of one of the Sons of God of whom Jesus is the firstborn. Then many would follow. (John 3:5) Jesus would be the firstborn among many.
(Romans 8:29) “For those whom He foreknew, He also predestined to become conformed to the image of His Son, so that He would be the firstborn among many brethren…”

The prophetic signs in the sky represent the woman (the church of the Lord) and the Dragon and must be seen as “Signs of the End Times”.

If a righteous one of God is going to be born again out of the spirit through Fire, then in that one hour some details happen that refer to a very different kind of conversion than only come to understanding and repentance, for he goes through fire!

A just convert, who years after his conversion and water baptism reaches the insight into the 2nd degree of knowledge, is born again through Fire(!) out of the the spirit. This battle is called the Fire Trial. He is going through Fire! See verse (Rev.3:18). He does not know what happens to him at that moment. He screams! Because the Dragon wants to devour this child at birth.
*) See: “The Sons of God” (Way to spiritual Rebirth 1)

The false Prophet is slowly becoming visible
The position of the stars, on Sept 23, 2017, represented the image that actually refers to Satan, but is very similar to Rev.12:1-2 and 4b. However, this is a visible fact in the sky and could be read from the stars. But… the truth of this mystery is hidden in the Bible in the 2nd degree of knowledge. These are two separate events. One is spiritually invisible and the other is visible to the world.
___
The signs in the sky refer to Satan and his child. The woman (that is the earth) does not have to shout in this case and the Dragon who wants to devour the child is in fact Satan himself who sees his child being born on earth. The false Prophet was in fact already born on February 5, 1962 but will only become visible to humans from July/Aug. 2018!

The same also happened with Jesus who was first recognized by the people 30 years later as the Son of God the Father. The angels have made the birth of Jesus known to men (Luke 2:9-11).But Satan did not or hardly announced the birth of the Antichrist; that is what Jesus has had to do to warn people of this danger!

Birth Antichrist made known
The birth of these “Superhuman” was made known to the world through the book “A gift of profecy”: “…a child, born somewhere in the Middle East as a Jew, on Feb 5th, 1962, will revolutionize the world.” In the second half of 1965 alone, this book was reprinted 11 times in America, while “Reader’s Digest” also contained an excerpt in an edition of 25 million copies and in 14 languages. In many prophecies the Lord has confirmed that this child, born on Feb 5th, 1962, is indeed the Antichrist to be expected.

Source: Magazine Vision “The time is nearby” 1967

– Waiting for the last Benjamin –

.
Benjamin – The Last Son of God the Father

Brothers and sisters, in this overview are times and some details. What is first notable is about the last Bride, the last Oalim and the last Benjamin.

Now look at the year 2009! The last Bride. Initially I had thought that the last Bride was closed in 2012, because this is what I had filled in. But the Lord informed me that this was already in November 2009. Surprisingly, the Lord also gave me the month of that year… November(!) 2009. And how about the last Oalim. I had written that year of 2014 correctly. But again the Lord gave me the month… November(!) 2014. I did not know the month. The year alone would have been good already. (Rev.12:1) The Bride has a power of one sun, the Oalim has a power of 1000 suns!

See: “Lions on the Thrones of God” – (The Seven Heavens of God) (Dutch)

The level of the Oalim was closed in Nov.2014.* But, when the Lord gave me that information in July 2014, I was still amazed about it, despite the fact that I had already described it exactly 7(!) Years earlier. For I had thought that the level of the Oalim could always be attained by a Son of God. But, that is not the case. This doubt kept haunting me, because of the strength that belongs to the Oalim. The Lord has informed me that I had described the time of the Oalim correctly.
___
*) But now that the Lord has given me the month of the Bride and the Oalim I also understand why the Lord has given me the month of December (2018) of the Rapture. So you see, the Lord also makes known the month. But we can not determine the day nor the hour. That is impossible!
(Matthew 24:42) “Therefore be on the alert, for you do not know which day your Lord is coming.”

(Matthew 24:44) “For this reason you also must be ready; for the Son of Man is coming at an hour when you do not think He will.”

The last Benjamin
When it comes to the Rapture, there is still something very important of which I have no view at all. Namely the Rebirth of the last Benjamin! This one must still be born again out of the spirit, because that is in fact what the waiting is for, otherwise the Rapture would have occurred long ago!
This Rebirth out of the spirit will be in the month of August 2018. This last Son of God the Father can only use his insights for three weeks. Only after that the Rapture will take place.
_____

See details of this one last Son of God the Father!
“The last Benjamin” – (The mystery of the winter and the Sabbath)
“The Sons of God” – (Way to Spiritual Rebirth Part 1) (Dutch)

Timetable – The Sons of God 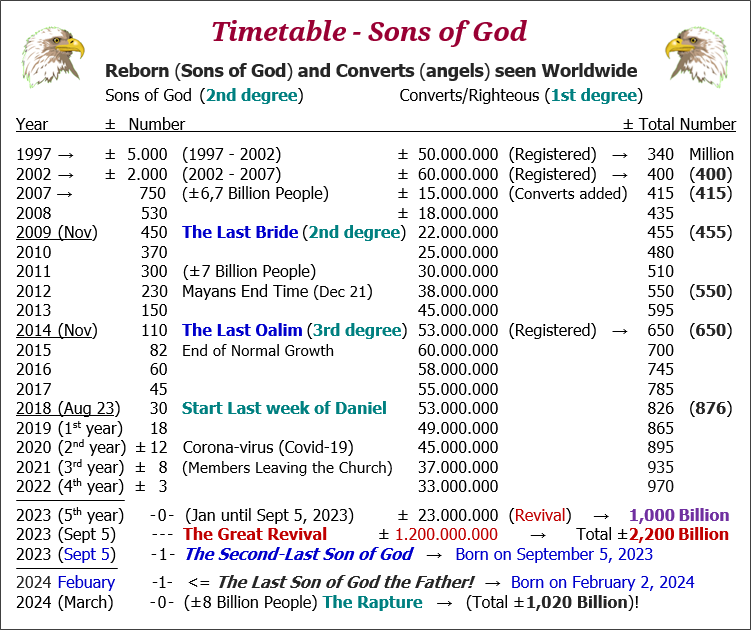 The last Son of God the Father
After the false Prophet is killed, the last convert/righteous one of God, who has obtained the insight in the 2nd degree, has exactly three days to be born again out of the spirit, which will indeed happen.

Both angels and Sons of God are born on Earth. More and more people from the world come to insight and conversion. There are really many millions and they are getting more and more! But becoming Sons of God, is being obtained less and less. Therefore God the Father is concerned about His last Son, who is yet to be born again out of the spirit and there is in fact the waiting for, the last Son of God the Father. The last Benjamin can only enjoy from his insights for another three weeks and then the Rapture is a fact, because after that Armageddon breaks out!

The Holy Spirit and the last Benjamin 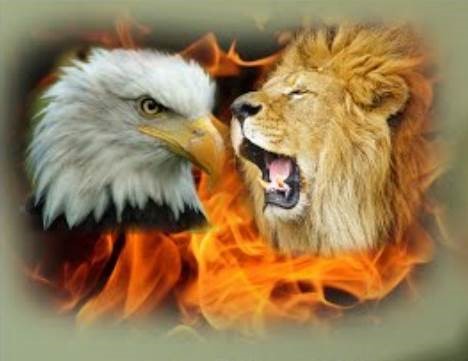 Many Christians, Preachers and Pastors, are really surprised that Jesus did not come yet with the Rapture. But the waiting is for the last ‘Benjamin’ to be born again out of the spirit. After that the Holy Spirit will no longer be able to find anyone who could be born again out of the spirit. That is because the spirit in this world does no longer allow it.
See: “The 1st and the 2nd Fire Test”
(A Son of God and the Oalim born out of Fire)

Source: Photos, Images and Drawings
The Church of the Lord and the Dragon
(The Bride of the Lord on the Moon)
Source: _https://pineut.wordpress.com/tag/theologie/
Photo Leeuw. Source: _http://xn--80aqafcrtq.cc/nl/?p=85947
Photo (Amercan Bald Eagle)
Source: _http://naturemappingfoundation.org/natmap/facts/bald_eagle_k6.html
A Son of God and the Lion born out of Fire
(The 1st/2nd Fire Test) The Sons of God/The Oalim
Source: _https://www.youtube.com/watch?v=U_M57kUSASw
===*===