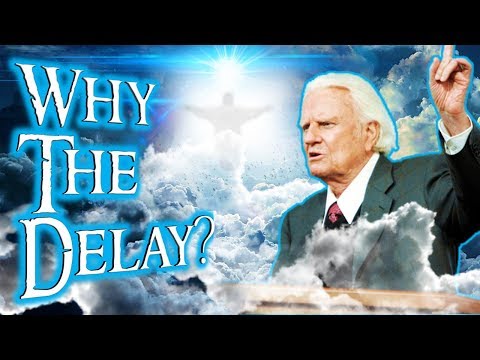 The Rapture Postponed?
– End Time almost over –
.
Where is the Rapture?

The Lord postpones all things to the very last moment, even to the last hour! When the Lord gave me the vision of Aug 23, 2018, on March 23, 2013, I saw that there was exactly five years and five months between them. The vision Aug 2018 was difficult to calculate, but it also took more than five years before I realized that the Last Week of Daniel had first started on Aug 23, 2018.

The number Five
In every vision I have received from the Lord, the number 5 is incorporated. The number five over and over again. Why is that? That probably has to do with the four horsemen. Namely, after every 5 months a rider rises. But… only the time of the false Prophet has been shortened. That would first be 3,5 years of false peace. There was only five months left and now only 90 days! It is likely that this time will also be shortened.
The time that the false Prophet has left, so to speak, is becoming less and less, because on Feb 2, 2022 is his last (!) day on earth and then, three days later, he has to hand over his power to Satan! How much time does the false Prophet have left? Maybe ±80 days?
___
See: The White Horse of False Peace and the Three Horses of Armageddon:
A different horse every five months.
The False Prophet on the white horse: From Nov 2021 to Feb 2, 2022. (±80 days?)
The Red Horse: From Feb 5, 2022 until the end on Sept 5, 2025.
The Black Horse: From ±5 July 2022 until the end of Armageddon in June 2025.

Seen from Nov 5 to 12, 2022, the margin is only 7 days! Then the false Prophet must reveal himself, because his time is almost up!
See new and latest calculation:

The vision of Aug 23, 2018 marks the beginning of the last Week of Daniel.
Because of the differences in time, it took me a while to realize that.

(Chip 59) The false Prophet does not become older than 59 years of age.

Revelation Antichrist is expected on Feb 5, 2022. The moment the false Prophet is killed, Satan (The second Beast) takes over the authority with a “Walk-In”.
The end of the Antichrist will be on Sept 5, 2025.

After Napoleon and Hitler, the third Antichrist is the worst of the three!

The second Beast
The rider on the first horse disappears already after ±80 days and the false Prophet, the first Beast, on the white horse does not appear again.
The rider on ‘The Red Horse’ was in fact first the rider of the White Horse, who rose from the dead. The body of the false Prophet is taken over by Satan himself on Feb 5, 2022, with a Walk-In, and then becomes the Antichrist, the second Beast, the destroyer and he has a sword!

The Resurrection of the False Prophet

The false Prophet was born on Feb 5, 1962 and is not an Antichrist. But that soon changes the moment he is killed. Because 72 hours later, on Feb 5, 2022, the false Prophet rises again and has miraculously recovered from a fatal head wound!
___
See: (Rev 13:3-4) “And I saw one of his heads as it were wounded to death; and his deadly wound was healed: and all the world wondered after the beast. [4] And they worshipped the dragon which gave power unto the beast: and they worshipped the beast, saying, Who is like unto the beast? who is able to make war with him?”

(Rev 13:12) “And he exerciseth all the power of the first beast before him, and causeth the earth and them which dwell therein to worship the first beast, whose deadly wound was healed.”

Shift in Time no Longer Possible
– The Times are Fixed –
.
There will be no more delay
The revelation of the false Prophet should have already taken place in Oct 2021. That will now almost certainly be in Nov 2021, because the End Time ends on Feb 2, 2022! There is hardly any time left for the Holy Spirit for the Great Revival.

(Rev 10:6c-7) “…that there shall be delay no longer: [7] But in the days of the voice of the seventh angel, when he is about to sound, then is finished they mystery of God, according to the good tidings which he declared to his servants the prophets.”
This mystery concerns the mystery of the last Son of God.

Both angels and Sons of God are born on earth.

The last Benjamin, the last Son of God the Father, will be born again from the spirit on Feb 2, 2022. He will be able to enjoy his level on earth for ±70 days before the Rapture will take place on April 13, 2022.
(Image: The Last Benjamin)

1)_Revelation false Prophet before the Sting virus breaks out.
2)_Expected: Worldwide three or four days of Sting Virus.
3)_The false Prophet could reveal himself between Nov 5 and 19, 2021.
The best time would be on Friday 5 or Friday 12 November 2021.

The false Prophet then has left 89 days or 82 days.

The Lion of God

First the false Prophet has yet to reveal himself at the beginning of Nov 2021. Then after about 3 days later the Sting Virus breaks out for 3 or 4 days! Then the Great Revival breaks out and the Holy Spirit, like a Lion, will stand with its paws on both viruses, the Corona and the Sting Virus, which will immediately cease to exist.

Satan Reassures the Christians
One of the most used texts not to inquire is that of (Matt 24:36) “But of that day and hour knoweth no one, not even the angels of heaven, neither the Son, but the Father only.”  – The devil knows he’s hitting his target.

But… as the Rapture gets closer and closer, it is hardly possible to shift in time, so that the day of the 1st and 2nd Rapture has become visible.
(Image: Doomsday Clock)

Only a few are able to see this and… The Sons of God!

Jesus: “Those who are awake and pray when I come will know when I am coming!”

Source: Pastor Sori Park (South Korea) This means that there are indeed Christians who are able to recognize the time of the year, the month and even the day! 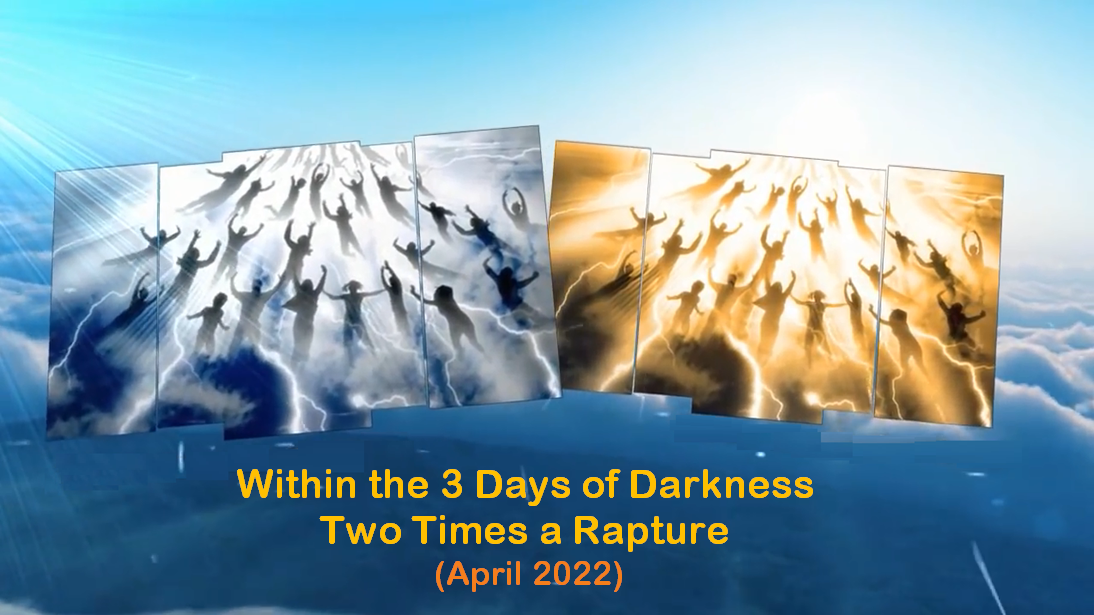 The Cross is the symbol that reminds people of Jesus. But the cross of Jesus disappears from the living room and can no longer be found in the homes of many people in the world.

The Candlestick is the Holy Spirit. That is the light in the hearts of many Christians. But the Candlestick of God shall be taken away on the day the false Prophet is killed! No one will then be able to speak in tongues anymore, because the Holy Spirit has been taken out from all the hearts of Christians. It will thereafter take another 70 days before the 1st and 2nd Rapture will take place on April 13 and 16, 2022.

Many Christians react in the same way. But the worst is yet to come, because very many will be left behind in the Valley of Armageddon! That is to say ±99! (Luke 15:1-32)
A very few only will be Raptured.

See Details: Rapture One Billion (Nobody Wants To stay Behind)

The Rapture is Expected in April 2022
This Rapture happens in an indivisible moment and is virtually invisible. The reason is because we have the three days of Jonah first and then the three Dark Horror days. At the beginning and end of these three Dark Days, a Rapture will take place twice. Suddenly all the small children up to and including 7 years old and from believing parents up to and including 12 years old, and many Christians, have been taken away from the face of the earth with the Rapture. This is the first Rapture, but after three days there will be another Rapture!
.
All Christians will be at home by then, because there has been no daylight in the whole world for three days. These are the days of Jonah that Jesus spoke about.
(Matt 12:38-39) “Then certain of the scribes and of the Pharisees answered, saying, Master, we would see a sign from thee. [39] But he answered and said unto them, An evil and adulterous generation seeketh after a sign; and there shall no sign be given to it, but the sign of the prophet Jonas.”
Then contiguous come the three days of pure Horror, death and destruction!
See: Three Days of Darkness and The Night of 72 Hours

(Two times 72 hours) The three days of Jonah will be very colorful. The Auroras will last for 72 hours and in the sky a large red Cross will be seen around the world. Then comes the night of 72 hours!

The 1st and 2nd Rapture will take place in the Dark

Jesus: “The last three days before the Rapture you can no longer know whether it is day or night.”  – This has to do with the three days of Jonah and the three days of total darkness.
The situation in the world has already become so dire that many churches are in survival mode. The church of the Lord seems full, but there are hardly enough resources (money) to keep the church standing.
(The End Time) The Lord says the time is already up. Jesus: “This is the end of the age, this is it. You are living in the most serious time ever in the history of this earth.”

How much time do we have?
Jesus: “Time has long since passed. The time is already up! The lines have already been drawn. I know who are Mine and who are not. However, beloved ones, you must prepare yourselves so that you may hear the call of the shofar (horn).”

With the Rapture, only a handful of Christians will be raptured. The great tribulation has already been going on by then for three months!
See, a statement from the Lord when it comes to the Rapture.
Jesus: “Out of all churches and congregations it will be only a small quantity, which will then be found worthy to be taken away by the Rapture to the Father’s house, without seeing death.”

Source: Louise Buchmann (Switzerland) “What the Lord showed me and let me hear.” (p.27)

– My First Report –
.
The End Time – Doubting the Date
Since the End Time is almost over, I began to doubt the time.
.
(!!!) No coincidence
Now see how the Lord answered my question:
When I was praying at 11:00 am on Tuesday morning, August 6, 2019, I asked: “Lord, do I have the date of the 1st Rapture correct?”
When I asked, the Lord reminded me to take a look when I first posted a report on this website (The Sons of God). That was on April 13, 2015!
Immediately I had to think of April 13, 2022, because that is the day, month and year of the 1st Rapture. That is exactly 7 years later! How is it possible. Would I still doubt all the visions the Lord has given me?

The two most beautiful visions were Aug 2018 and Five Chips 59.

(Image) Billy Graham: “Why The Delay?”
See the Lord in the center of the image: The moment of the Rapture.
(When is the Lord coming?) Billy Graham has wondered about that too. He really thought the Lord would come back during his life time, but alas. The Lord already said he would get Billy Graham home before that time.
See details:
The Lord explains which events would happen before the Rapture and one of them was bringing Billy Graham home. See details: Armageddon is in sight
Jesus: “These are the events that will soon happen as a signal of your departure from this Earth, My Beloved…”  – “I’ll take Billy Graham home.”
Given by the Holy Spirit to: Maurice Sklar
Billy Graham (Nov 7, 1918) – (Feb 21, 2018) Greatest Evangelist of all time!
He has been able to reach more than one billion(!) people with the Word.
.
===*=== 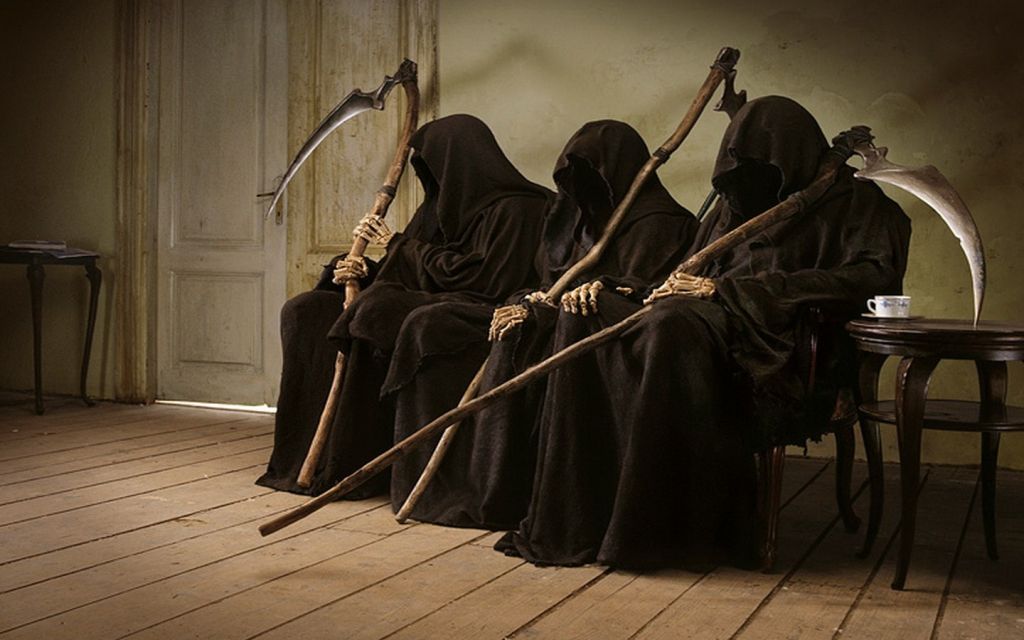 Waiting Until After the Rapture – Three times a Grim Reaper?
Many go for the Golden Crown!
.
===*===
Text: New American Standard Bible (NASB) and the King James Bible