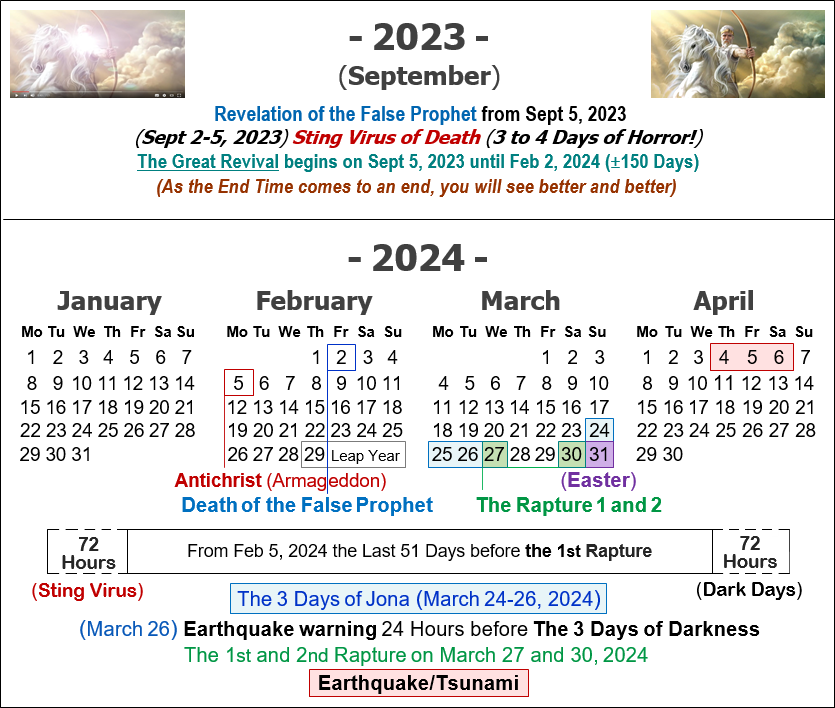 Ooh… Brothers and sisters, the Rapture first in March 2024

[42] “Therefore be on the alert, for you do not know which day your Lord is coming.”

(John 16:12-13) “I have many more things to say to you, but you cannot bear them now. [13] But when He, the Spirit of truth, comes, He will guide you into all the truth; for He will not speak on His own initiative, but whatever He hears, He will speak; and He will disclose to you what is to come.”
I finally determined the month and the year of the Rapture on the basis of two visions that the Lord gave me. (Aug 2018 and Chip 59)
Despite these visions, I had misjudged the time up to four times. It would be first March 2018, then Aug 2018, then before January 19, 2019 and lastly before February 4, 2022, and now before March 31, 2024! But as the Rapture comes closer, I suddenly saw when the Rapture will eventually take place.

Now see how Jesus helped me with this!

When it really gets dark
My prayer: “Lord, when will you come back with the Rapture and on what should I pay attention to?”
I brought this prayer to the Lord, because for the third time I had been unable to determine the right year and the month of the Rapture. That happened after I had listened to the vision of Sadhu Sundar Selvaraj on YouTube. I really thought that the Rapture would take place before January 21, 2019.
Because I did not know it anymore, I started with a new report: “Estimated date of Rapture no longer determinable” – But when I had already written something about it, the Lord made me know to take a good look at the visions again. Jesus: “Study the visions!”

Not so hard
It was as if the Lord wanted to make it clear to me that it is not at all difficult to know when the Lord would return with the Rapture. While studying the visions again, I saw that the vision “Aug 2018” was and should be the beginning of Daniel’s last Week and that the vision “Chip 59” would be the full age of the false Prophet. And yes, then I saw it! It is a date! Sept 5, (2023)

Countdown in the End Time
But… then the Lord gave me the following: Jesus: “Make sure you have enough food and drinks in your homes for at least three months!”

Brothers and sisters, Jesus would not just have said that without any reason. Yes, then I also saw the month! The Rapture would thus take place in March 2024. This was already confirmed with the two visions (Aug 2018 and Chip 59) and for the fourth time with what Jesus said: “…to have food and drinks in the house for at least three months.” – (That’s 90 days)

That means that the great Revival must be over by then, and the Holy Spirit is already gone. We then have to spend another 51 days in the valley of Armageddon before the Rapture will take place!

The Rapture can now almost certainly be expected in March 2024. The month of May is not possible, because then we are already in the fourth month of the great tribulation Armageddon. Such is what the vision Aug 2018 and the Chip 59 shows. The False Prophet was born on February 5, 1962 and will become 60 years old. The false Prophet is killed on ±2 Feb 2024. He will be exactly 61 years, 11 months and 28 days old. Then three days later the false Prophet suddenly rises from the dead. His spirit will then be replaced by the spirit of Satan, the Antichrist!

The Great Revival
The moment the false Prophet will reveal himself in Sept 5, 2023, the last great Revival breaks out, which will last exactly five months. (Joel 2:23/28-29) Total ±150 days.

The vision Aug 23, 2018 indicates the month of August as the start of the last Week of Daniel. Based on all this data, it is now almost certain that the false Prophet will be killed on Feb ±2, 2024. He will then have been in power for ±150 days at that time.

One of the most used texts for not researching is that of Matthew 24:36 “But of that day and hour no one knows, not even the angels of heaven, nor the Son, but the Father alone.”
The devil knows that with this verse he hits its goal. The Christians therefore willingly accept this and reject (John 16:13) in advance and especially when it comes to the time of the Rapture. The Holy Spirit can hardly clarify anything to these stiff Christians. “But when He, the Spirit of truth, comes, He will guide you into all the truth; for He will not speak on His own initiative, but whatever He hears, He will speak; and He will disclose to you what is to come.”
With “disclose” the Lord clearly speaks about a time here.

The Lord only mentions here the day and the hour, not the month nor year. Otherwise I would not have received the visions of Aug 2018 and Chip 59.

The Rapture?
The Christians do not want to hear it, because it is not Biblical. As soon as you come up with dates they already put you off. They do not want to look nor believe outside the Bible because they are afraid that they will come across false teachings, false assertions and false Prophets that could influence them.

Many Christians do not believe that there are still Prophets today. Jesus has passed on many end-time prophecies to Christians, but there are many who do not want to believe them.
(Luke 13:34) “O Jerusalem, Jerusalem, the city that kills the prophets and stones those sent to her! How often I wanted to gather your children together, just as a hen gathers her brood under her wings, and you would not have it!”

(Photo) Unbelievable what this chicken hatches!

“The last week of Daniel”

Vision Aug 2018 – The beginning of the last Week of Daniel
(Psalms 90:10) “As for the days of our life, they contain seventy years, Or if due to strength, eighty years, Yet their pride is but labor and sorrow; For soon it is gone and we fly away.”
(Matthew 24:32) “Now learn the parable from the fig tree: when its branch has already become tender and puts forth its leaves, you know that summer is near…” – Israel is this fig tree!
(The Rapture) The countdown began on May 14, 1948 with the emergence of the State of Israel for the Jews and most likely ends on Feb 2, 2024.

Armageddon begins on the very moment when the false Prophet is killed on Feb 2, 2024.

The False Peace and Armageddon on a Postage Stamp

.
The white horse of false peace and the three horses of
– Armageddon –
(The red horse, the black horse and the pale horse) 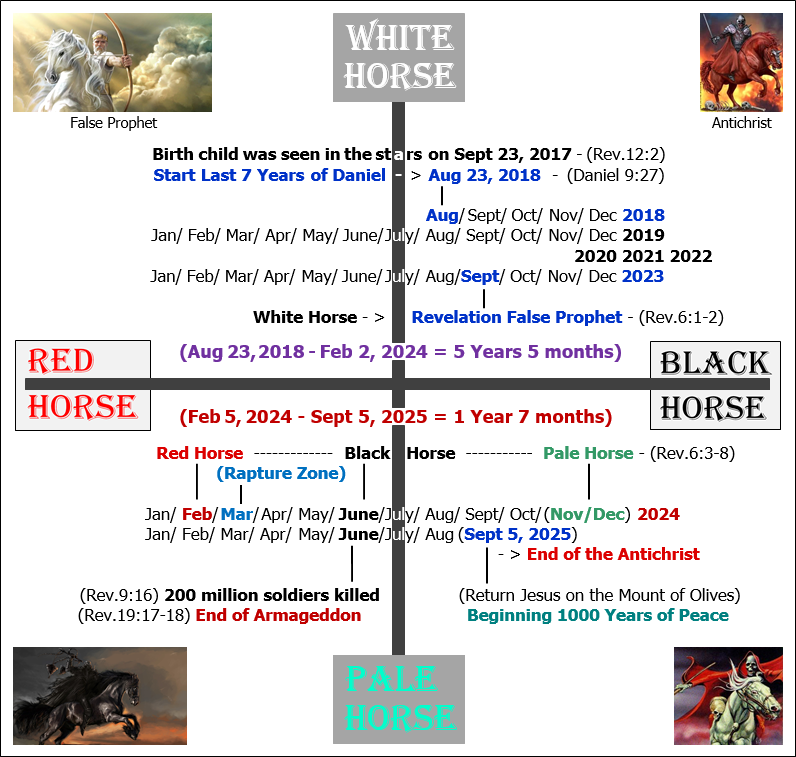