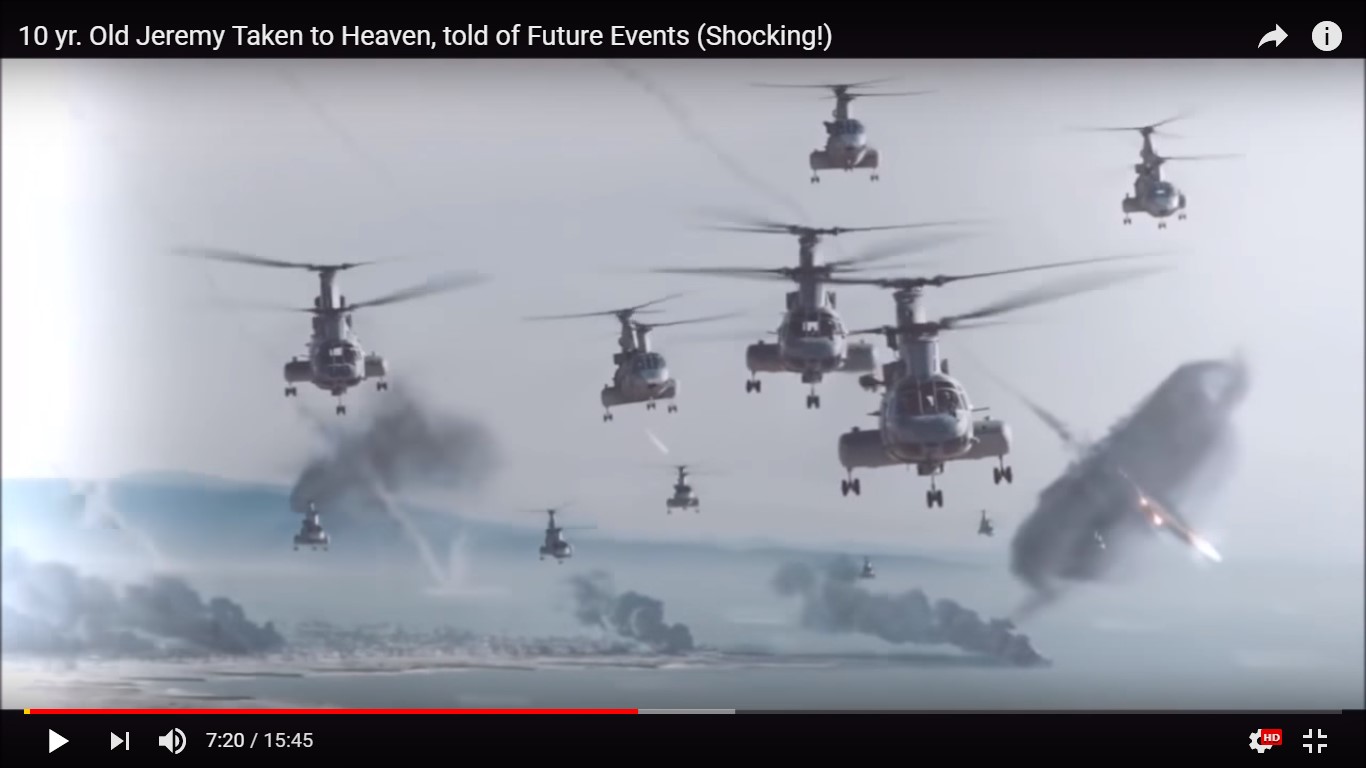 UFOs and aliens from other planets attack the Earth

The 10-year-old Jeremy and his Vision of Armageddon
Jeremy had a near-death experience when he was 10 years old.

For 40 minutes Jeremy was taken to heaven and upon returning to earth he told about difficult times in the future. After he went to heaven for the last time his story was told by his mother. But everything the boy has told about the future concerns Armageddon and that is not particularly reassuring. It is terrible!

The ultimate future
Many people believe that aliens exist. But what if the aliens are actually disguised demons? This is what the boy said to his mother before he died when he was 13 years old.
The boy spoke about the ultimate future of the earth. He said that the world war will begin first among mankind.
His mother continued to emphasize various details about the incredible experiences of her son.

What her son could see was the first day of the slaughter – when evil groups of demons will consume humanity, one at a time. People will be eaten by the invading group of demonic forces (aliens) who are extraterrestrial.

Some Christians suspect that aliens and UFOs have a demonic origin. Evil spirits could pretend to be as extraterrestrial beings. Kidnappings by aliens or Ufonauts could take place immediately after the Rapture. In the “Valley of Armageddon” these are demons and aliens, the army of Satan. 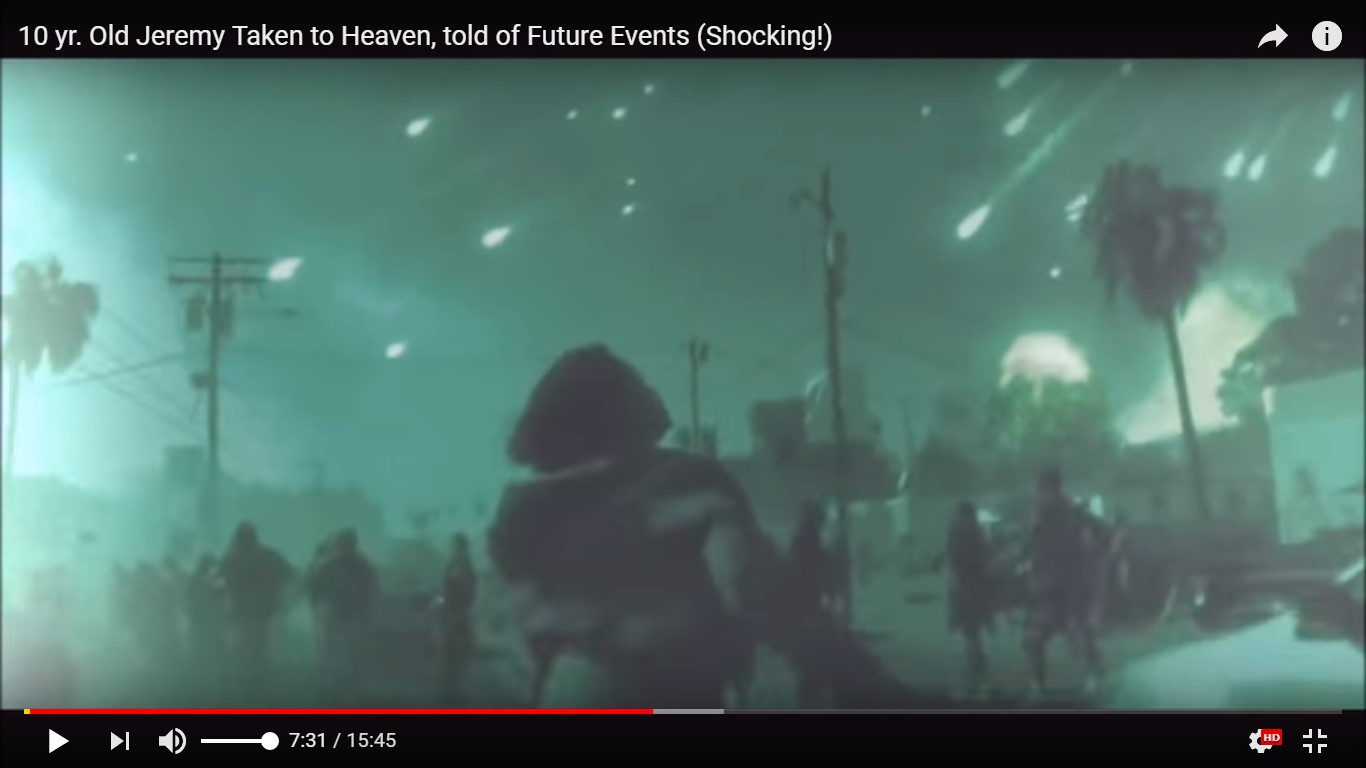 Attack from space by UFOs and spaceships

Demonic aliens
The images in the video are very realistic with what Armageddon will bring to people.
It starts at 6:45 where Jeremy’s mother begins to speak about a war that will spread throughout the world and can not be compared to any other war.

People are worried about the 3rd WW. But that is not what people have to worry about. There will soon occur something terrible and it is very evil. It is an invasion of aliens and demons and they are at war with the people on Earth. It is a huge army!

The horrors in the Valley of Armageddon will exceed every imagination of the people. In this merciless war people will have to deal with unscrupulous human demons and during which really anything will be possible. There will be very fearful unimaginable events of which Jesus has said that such a thing, in any war, has never happened before. It will be a very mean war of unprecedented nature.

Extraterrestrials, or aliens, bring a Horror scenario that has never before been seen in a war and not even in a Horror movie. These creepy aliens will eat people, which it is hard to believe. They are strange-looking extraterrestrials. This is a war with human demons that look like aliens!

In the Valley of Armageddon the most unthinkable will take place
Although this vision is part of what will actually happen in the Valley of Armageddon, it is not nearly as bad as the coming spiritual war during which about 2.5 billion people will risk to go for the No.666! Because Satan will not just let man go. He will torture them to the limit by force, imposing them in this way to accept the Burn Mark (666).
(Revelation 13:16-18) “He that hath understanding, let him calculate the number of the beast…”

Then there is another danger that should not be considered too lightly: Demons! This invisible enemy will make indwelling immediately after the Rapture in all remaining people on earth. For the time being the Holy Spirit is still keeping the door locked for a while, but that will soon change when the Rapture has taken place, because then the Holy Spirit will not be there anymore.
(2 Thessalonians 2:7) “For the mystery of lawlessness doth already work: only there is one that restraineth now, until he be taken out of the way.”

See: The Power of the Anti Christ

(Daniel 7:25) “And he shall speak words against the Most High, and shall wear out the saints of the Most High; and he shall think to change the times and the law; and they shall be given into his hand until a time and times and half a time.”  (Is 3.5 years)

See, what Jesus said about that time:
(Matthew 24:15-22) “When therefore ye see the abomination of desolation, which was spoken of through Daniel the prophet, standing in the holy place (let him that readeth understand), then let them that are in Judaea flee unto the mountains: let him that is on the housetop not go down to take out things that are in his house: and let him that is in the field not return back to take his cloak. But woe unto them that are with child and to them that give suck in those days!”
[20] “And pray ye that your flight be not in the winter, neither on a sabbath: [21] for then shall be great tribulation, such as hath not been from the beginning of the world until now, no, nor ever shall be.”

22] “And except those days had been shortened, no flesh would have been saved: but for the elect’s sake those days shall be shortened.”

It was a big miracle that Jeremy still woke up after he had been declared dead 40 minutes earlier. Fortunately Jeremy, afterwards, did not have any visible brain damage after he had been revived. Unfortunately, three years later, he would still die from the trauma that his heart and lungs suffered from the accident of drowning.

The boy continued to explain his vision. He met a man in Heaven. He wore a long robe that was wrapped around the waist with a gold waistband. The man had long hair and a beard. The boy thought it was Jesus and told his mother. Jesus said that He knew his mother and that He would take Jeremy somewhere else, in a safe place. After Jeremy held the hand of Jesus, they flew higher and higher into the sky, flying both past the clouds and space. They went far beyond anything, including other planets, until they reached a rather wonderful place.

Heaven is made of crystal and everyone is a family

What he saw there looked like a city made of crystal that Jesus showed Jeremy. The streets were paved with gold and the people seemed to be extremely happy and friendly. Everyone around him felt like a family. The colors there are much more beautiful than those on earth.

Jeremy also explained that your spirit in heaven gives you transformation possibilities. Whatever Jesus can do in Heaven, you can do that too. Jeremy could also see into the future and how his brother Daniel would choose the wrong side in life by joining the army. His brother later changes his ways. Jeremy said that his mother, before the war (Armageddon) will begin, shall be in heaven already, before all this will happen.

During this conversation with his mother, Jeremy explained that the war will be coming from the army of Satan. Because of this threat, the war will break out with alien demons (aliens) invading the Earth and this is so serious that people must be prepared for this. 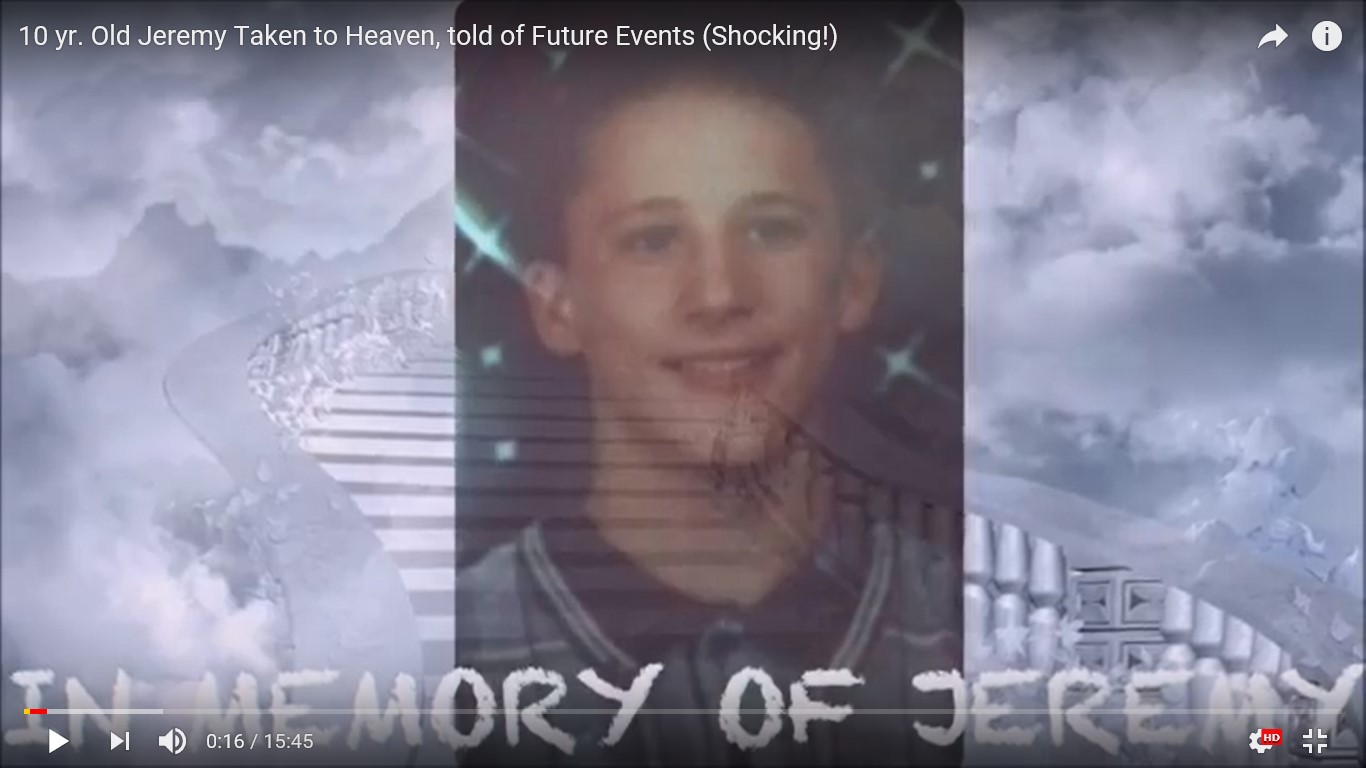