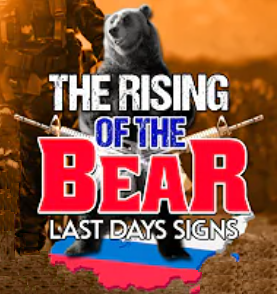 The Rising of the Bear

.
The Russian Bear in the End Times
.
The Character of President Putin
Jacob Lorber (Austria 1800-1864)

Jesus: “Behold, the polar bear (Russia) has no fear of feather quills. (These are written agreements and treaties that used to be written down with feather quills!) Much gold and silver and very many horsemen are dear to his heart. Woe to him if he leaves his lair. I say unto you: He shall prevail in might and tyranny!”

The last Week of Daniel divided into 5 parts
(Matt 24:6) “And ye shall hear of wars and rumours of wars: see that ye be not troubled: for all these things must come to pass, but the end is not yet.”
Brothers and sisters, I am not a prophet but a writer about the End Times: The last Week of Daniel!

See image: Vision Aug.2018 at the beginning of the last Week of Daniel!

The Rapture postponed for one year
See why: Jesus: “My people are not prepared.”
This is what Jesus gave me on Thursday, Sept 26, 2019 at 1:26 PM.
The Christians have one more year to put their house in order.

[666] The Mark of Death
What the Mark Really Does

With the no.666 burned into the right hand or forehead with a Laser, death is a fact. This Sign/Logo [666] is deadly! It instantly kills the conscience of man. At that moment, that person undergoes an instant spiritual change! Man, his behavior and mind, changes into an emotionless being, which Jesus in anyway wants to prevent.
___
Waiting for the 4th Rider
The second 3,5 years of the last Week of Daniel is divided into three parts.
Armageddon (1) From Feb 5, 2023 to Nov 2023.
The no.[666] The 10 days of prison

(Rev 2:10-11) Jesus: “Fear none of those things which thou shalt suffer: behold, the devil shall cast some of you into prison, that ye may be tried; and ye shall have tribulation ten days: Be thou faithful unto death, and I will give thee a crown of life.”
[11] He that hath an ear, let him hear what the Spirit saith unto the churches: “He that overcometh shall not be hurt of the second death.”
___

(The Guillotine – The Hardest Form of Repentance)

Armageddon (3) comes to an end on June ±5, 2025 with the death of the 200 million(!) Chinese soldiers. An angel of God will kill that army within 24 hours. Then three months later, Jesus returns and sets foot on the Mount of Olives, which at that instant will split in two.

People worry about a possible Third World War. But what is happening in Ukraine now is a harbinger of what will happen soon: The 3rd and 4th World War! In fact, preparations have already begun. For now, all this is still invisible. World War III will be fought only in Europe and will last only 3 to 4 weeks at most. Then we get the two Astroide impacts and ±2 weeks later the Fourth World War!

Attack-War
The Russian invasion of Ukraine is an Attack-War by Russia against neighboring Ukraine. The invasion began on February 24, 2022 and is part of the Russia-Ukraine war that has been going on since 2014.

On February 21, 2022, President Putin first recognized the self-proclaimed people’s republics of Donetsk and Loehansk, after which the war against neighboring Ukraine started. 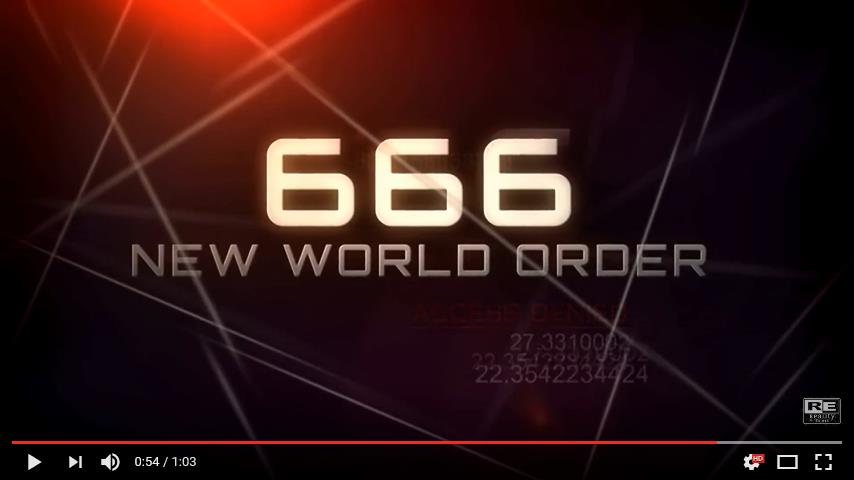 Armageddon misunderstood by many
.
Spiritual War [666]

(March/April 2022) The atrocities we already have seen on TV are a harbinger of what the Third World War will soon bring to people. But… that is not yet Armageddon.

World War Four with Atomic Fire! The Great Nuclear War between Russia and America is not Armageddon either, as terrible as that may be. Armageddon is in fact a spiritual war and has never occurred on such a large scale. This is about the number 666!

Man has so ever eternal life, whether in Heaven, Paradise or in Hell, Hades. If a person has actually behaved outrageously bad on earth, he will go to Hell and will have to stay there for thousands of earth years and perhaps much longer. But… if the same person goes for the Mark 666, then we are no longer talking about thousands of years, but about billions of years!

Jesus: “It would have been better for such a person if he had never been born.”

Consequences no.[666]
(Rev 14:9-11) “And the third angel followed them, saying with a loud voice, If any man worship the beast and his image, and receive his mark in his forehead, or in his hand, [10] The same shall drink of the wine of the wrath of God, which is poured out without mixture into the cup of his indignation; and he shall be tormented with fire and brimstone in the presence of the holy angels, and in the presence of the Lamb.”
[11] “And the smoke of their torment ascendeth up for ever and ever, and they have no rest day nor night, who worship the beast and his image, and whosoever receiveth the mark of his name.”

(In all eternities… This is about billions of years!)

Brothers and sisters, what you are about to read may not be understood by everyone. The Lord Jesus wants to keep the Mark [666] away from the people as much as possible. The Lord wants to protect the elderly and the weak from this terrible Code 666. That is why the Lord has first blown the Coronavirus over the world, which will then be followed by the Sting Virus. These two viruses are judgments of God! Hardly anyone among the Christians sees that.

(Image) Vision Ken Peters: The Sign/Logo [666] burned into the hand!

From Feb 2023 many more horrors will take place. But that has to do with cause and effect. In this way the Lord wants to keep billions of people away from eternal prison, from again billions of years. Now see how the Lord is going to do that. For example: The two Asteroid impacts are clearly a judgment of God! The first asteroid hits in the middle of the Atlantic Ocean. With the second asteroid, the city of Mecca, is razed to the ground.

See further, the many disasters! 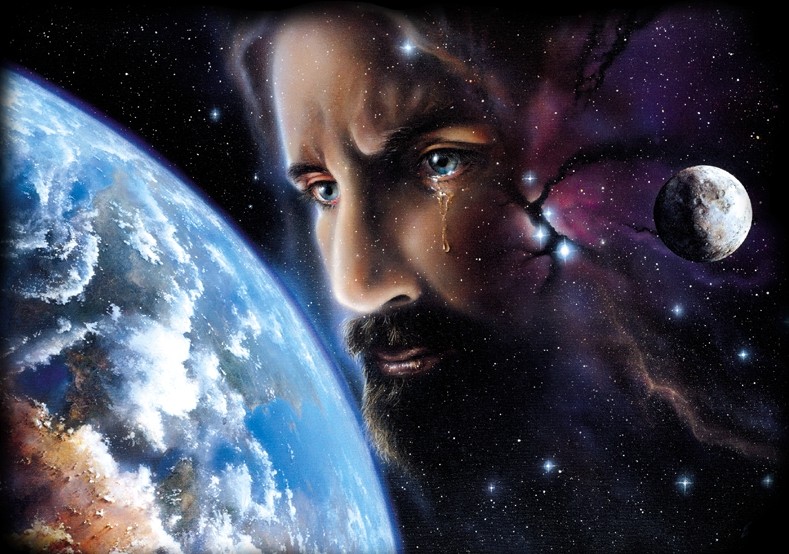 « Jesus »
“Unfortunately I can not save everyone”
This concerns the Mark [666]
.
Deadly disasters
Brothers and sisters, the Lord has prompted me to pay more attention to this.
Now see the following:

Man is a stiff creature and will not easily convert his heart. But whoever goes for the deadly number 666 in his life is spiritually dead! Jesus will try to keep many souls away from the number 666 even if the person is not a believer and totally separated from God. The coming disasters and terrors help the Lord herewith, that many people will die without the No.666. The soul is then, so to say, saved through fire!

This is about the preservation of the soul! Because what is left of it when you have been in prison for billions of years where Satan has tortured you every hour of the time, for billions of years! Man dies however terrible, but fortunately, struck by a deadly disaster, has not been able to accept the number 666.
Despite the fact that this human being has to spend hundreds or maybe thousands of years in the prison of Hell, at least he does not go for billions of years in Hell. Because, you just do not know when Satan will become open to reason. Only when he has come to the right insights will his former situation be restored with the name Lucifer! When that happens, all those who once chose no.666 are also free.
____
See: One million times 1000 years is one billion years!
(1,000,000 x 1,000 years of prison = 1,000,000,000 years of Hell)
But… we are talking billions of years here!

Jesus: “One day everything will turn as before.”

My people are destroyed for lack of knowledge (Hosea 4:6)
Jesus: “The earth is not a place of rest and peace, but is a battlefield in which Satan goes about like a roaring lion looking to see who he can devour.”
Ooh… brothers and sisters, if you only knew how the Lord Jesus cares about the people, then you would understand all this. Now see how and in what way the Lord will keep many people away from the no.666:
.
Judgments of God in the End Times
(1)_The Coronavirus from Dec ±1, 2019 t/m Sept 5, 2022.
(2)_The Sting virus (3 days) expected from Sept ±2 to 5, 2022.
(Armageddon)
(3)_World War III – (4) Twice an asteroid impact! – (5) World War 4 – (6) The 1st Rapture – (7) Three Days Of Darkness – (8) The 2nd Rapture – (9) The Great Earthquake – (10) The Greatest Tsunami Of All Time!
Only the 3rd and 4th World Wars is caused by man himself.
With the 1st and 2nd Rapture together, slightly more than 1 billion people are transported to the Heavenly Kingdom. The rest, about 4,3 billion, will not go for the number 666.

The Lord manages to keep them away from the number 666 by an untimely death. Many will go to prison (Hell) for years and others for thousands of years or more. After that they are free and fortunately rescued from the deadly No. 666. Man is by all means lost anyway, but this is about the preservation of the soul. Who can catch it, he catches it!

Eight months
God the Just is waging war with the people through the Corona and the Sting virus. These are judgments of God! The Sting virus is expected from Sept ±2, 2022, which will last approximately 3 days. Then the Great Revival will take place from Sept 5, 2022 until Feb 5, 2023. (Total 5 months)
From Sept ±2, 2022 to April ±15, 2023 a total of 5,3 billion people will be gone from the earth in eight months. The Lord thus wants to save many souls from the no.[666]!
.
The Remnant Christians
From April 2023 there will be 2,5 billion people left in the world. Many people who adhere to the world will choose the number 666. Curiously enough, many remnant Christians will also go for the deadly number 666. Despite all the indications and the many warnings on both sides, really incomprehensible but true.
(Remnant Christians: These were left with the Rapture. Many shall go for the Golden Crown!)
.
===*===
Text: New American Standard Bible (NASB) and the King James Bible

The Russian Bear in the End Times