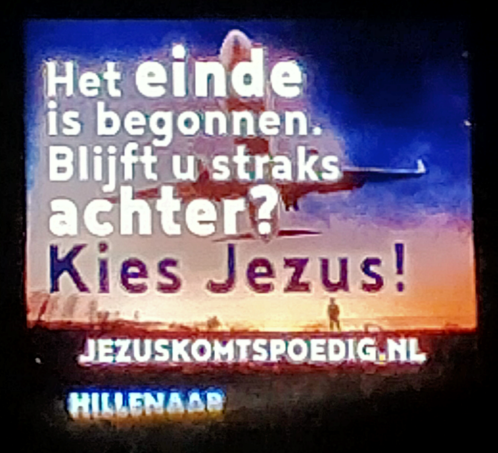 The end has begun. Are you going to be left behind? Choose Jesus!

On Saturday, Dec 18, 2021 at ±6:00 p.m. I was driving from Arnhem on the Highway(A12) towards Emmerich (Germany) when, about one Km before the border, near Beek, I saw a large Billboard. I could hardly believe what was written on it! It was busy on the road and you drive right past it. It was a moment in time, as multiple commercials were displayed on it.

Choose Jesus
I could already see that big Billboard from a distance. You unwittingly glance at it and that was it. But when the call “Choose Jesus!” appeared in the image, it was as if the Lord pointed out to me to look at that big Billboard again. And while I looked at it, the image also disappeared. It was truly an unmissable message that marked the End Times in big letters! It was only for a split second that I saw it, but that was enough. I immediately took the next exit and parked on the other side of the Highway and took some pictures in the dark.
The image is well chosen.

An Airliner takes off and… someone stays behind!

Advertising about the End Times?
You only see something like this when you are in America(USA). They are everywhere on the side of the Highways, but in the Netherlands? No, I didn’t expect that.
I myself am an End Time writer and write down everything that Jesus tells me. This website is not mine, but from Jesus. The visions that Jesus gives me, clearly concern the End Time.
See: (www.dezonengods.com) – “Jesus, and a website!”
That End Time Info “The End has begun” indicates the time in which we live. I went to look for that advertisement on the internet and yes, on Google ‘Images’ there are many signs.

The end has begun. Are you going to be left behind? Choose Jesus!

See Video below: Billboards on the Highways!

Are we living in the End Time?

The Coronavirus is used by the government as if we are already dealing with the number 666. Prepare yourself!
This report “Choose Jesus” was already finished, but I had to wait a little longer. 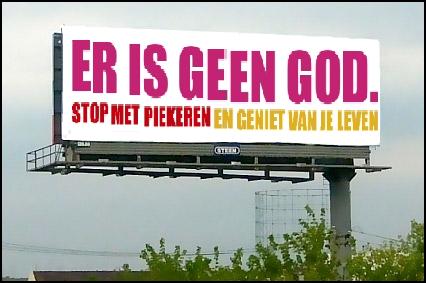 (Er is geen God. Stop met piekeren en geniet van je leven)
There is no God. Stop worrying and enjoy your life
.
Something to think about
This billboard makes people think. They will certainly investigate, because after all: you never know! If it doesn’t help, then it doesn’t hurt.

(Proverbs 1:32) “For the turning away of the simple shall slay them, and the prosperity of fools shall destroy them.”

(Hell) The best kept secret in the world!
Man has so ever eternal life, whether in Heaven, Paradise or in Hell, Hades.
(Ezekiel 18:23) “Have I any pleasure at all that the wicked should die? saith the Lord GOD: And not that he should return from his ways, and live?”
Better translation:

“No! Rather to this, that he may turn from his evil ways and have life!”

The first Beast is the false Prophet
The Beast Out of the Earth
(Rev 13:11-15) “And I beheld another [second] Beast [Antichrist] coming up out of the earth; and he had two horns like a lamb, and he spake as a dragon.
[12] And he exerciseth all the power of the first Beast before him, and causeth the earth and them which dwell therein to worship the first Beast, whose deadly wound was healed. [Now is the Antichrist]
[13] And he doeth great wonders, so that he maketh fire come down from heaven on the earth in the sight of men, [14] And deceiveth them that dwell on the earth by the means of those miracles which he had power to do in the sight of the Beast; saying to them that dwell on the earth, that they should make an image to the Beast, which had the wound by a sword, and did live. [Is the Antichrist]
[15] And he had power to give life unto the image of the Beast, that the image of the Beast should both speak, and cause that as many as would not worship the image of the Beast should be killed.”
.
Let him that hath understanding calculate the number [666]
The Mark of the Beast

(Rev 13:16-18) “And he causeth all, both small and great, rich and poor, free and bond, to receive a mark in their right hand, or in their foreheads: [17] And that no man might buy or sell, save he that had the mark, or the name of the Beast, or the number of his name. – The Mark Sign/Logo [666]
[18] Here is wisdom. Let him that hath understanding count the number of the Beast: For it is the number of a man; and his number is Six hundred threescore and six.”
.
===*===
Text: New American Standard Bible (NASB) and the King James Bible

The End Has Begun – Choose Jesus!

Source: Photos, Images, Pictures and Drawings
Photo: The end has begun. Are you going to be left behind? Choose Jesus!
Source: Own Photo taken at Beek (NL) at the border with Germany.
Six large Billboards
Source: _https://jezuskomtspoedig.nl/
Kenneth Johannes Kerver: “Het einde is nabij” | FLORIAN – YouTube (6:54)
Het einde is nabij – The end is near
See Video below: Billboards on the Highways!
(Image) [666] Color: Green/Black/Red
(Image) There is no God – Stop worrying and enjoy your life
Source: _https://appie.abspoel.nl/het-einde-van-het-atheisme/
(Image) [666] The Mark of the Beast
What everyone needs to know! – YouTube (1:02/ 4:57)
Source: _https://www.youtube.com/watch?v=6bEFo8BPBGc
Source: _http://spiritlessons.com/Documents/Mark_of_the_Beast/Dutch_Merkteken_van_het_Beest_666.htm
===*===