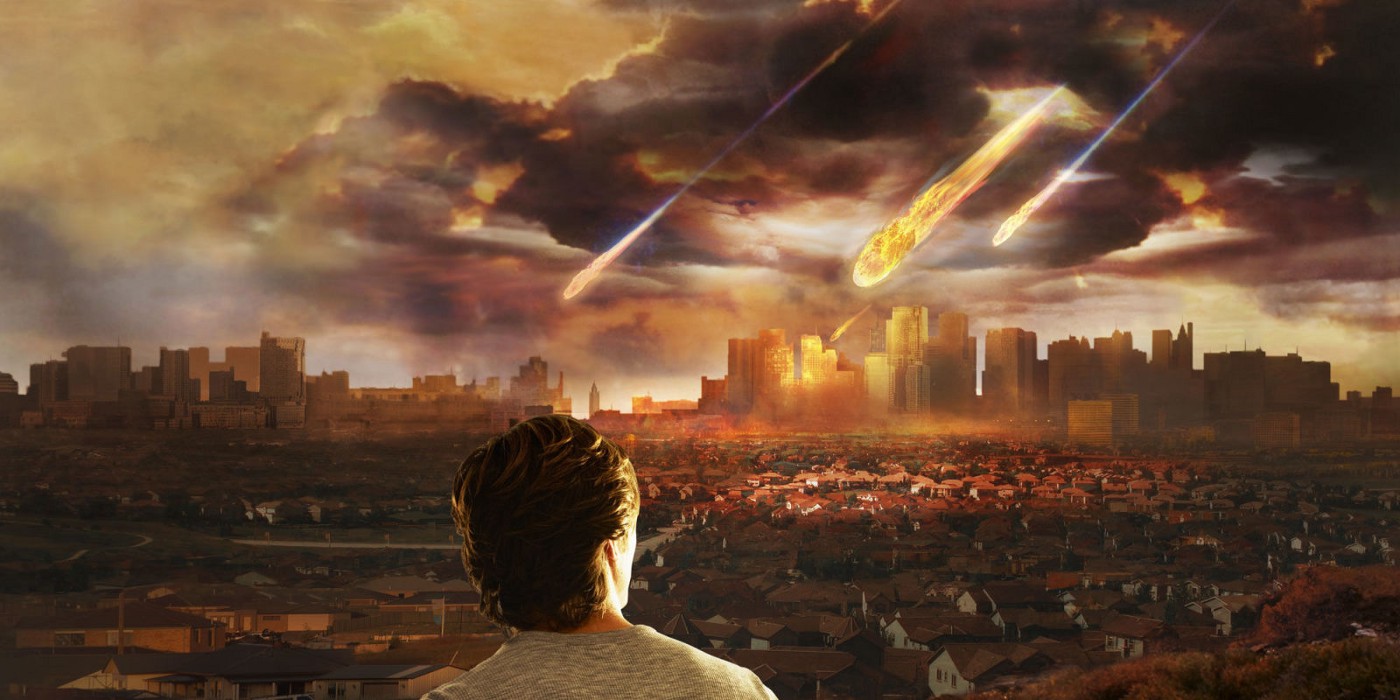 « The Rapture not in 2022 »
My people are not prepared
.
(Update: Feb 27, 2022)
The Great Revival not 3,5 years but five months
Jesus: “Prepare My people already, for because of the power of the Great Revival there will hardly be any attention for that anymore!”
The Lord is talking about the coming Armageddon here: The No.[666].
Jesus gave this to me on Thursday, September 26, 2019 at 1:26 PM.
Brothers and sisters, time is too short. Jesus: “My people are not prepared.”
___
Jesus: “There will be a short-lived Great Revival.”

The Rapture shifted one year
The 1st and 2nd Rapture are now expected on April 5 and 8, 2023. (Easter on April 9, 2023)
See events even before the Rapture!
(Matt 24:6-15) “And ye shall hear of wars and rumours of wars: see that ye be not troubled: for all these things must come to pass, but the end is not yet. [7] For nation shall rise against nation, and kingdom against kingdom: and there shall be famines, and pestilences, and earthquakes, in divers places. [8] All these are the beginning of sorrows.”
[11] “And many false prophets shall rise, and shall deceive many. [12] And because iniquity shall abound, the love of many shall wax cold.”
[15] “When ye therefore shall see the abomination of desolation, spoken of by Daniel the prophet, stand in the holy place* (whoso readeth, let him understand).
___
*) Holy Place: The Temple Mount in Jerusalem, Israel. – As soon as the world sees the Antichrist standing on the Temple Mount, the contractions will start from that moment on! For within three weeks the Antichrist will be expelled from the land of Israel.

(Matt 24:32-34) “Now learn a parable of the fig tree; When his branch is yet tender, and putteth forth leaves, ye know that summer is nigh: [33] So likewise ye, when ye shall see all these things, know that it is near, even at the doors. [34] Verily I say unto you, This generation shall not pass, till all these things be fulfilled.” 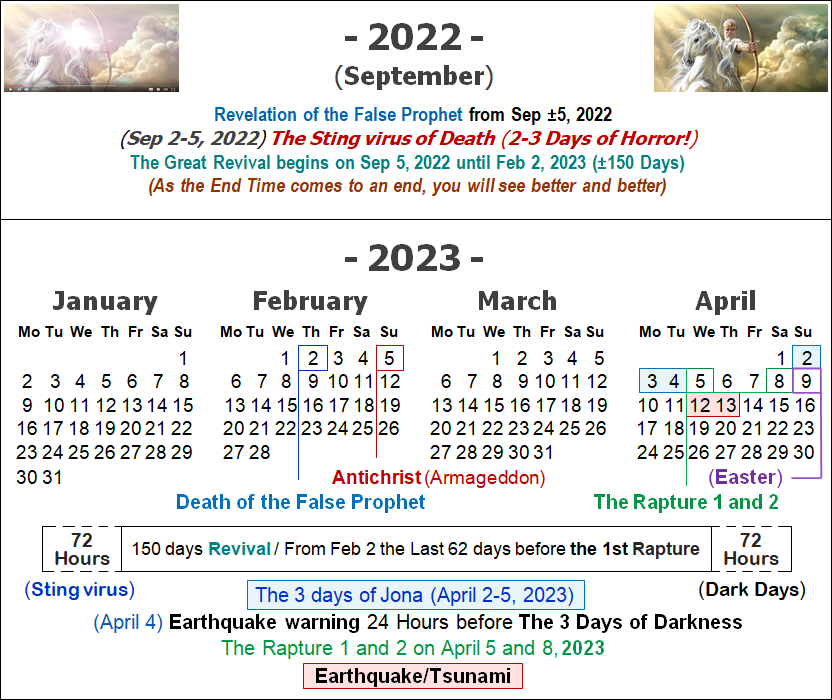 Jesus: “Those who are awake and pray when I come will know when I am coming!”
Source: Pastor Sori Park (South Korea) This means that there are indeed Christians who can recognize the time of the year, the month and even the day!
.
The Second Coming of Jesus (The Rapture)
Jesus: “The fire before My arrival will be called: Great and universal distress, misery and adversity, such as the earth has never seen. Faith will be extinguished, love will grow cold, and all the poor generations will lament and faint.”
.
The End Time
Brothers and sisters, the Rapture 1 and 2 on April 5 and 8, 2023.
Do you have any idea what still needs to happen?
See order:
─ Revelation False Prophet  – The Absolute World Leader.
─ (The false Prophet is expected from Sept 5, 2022 to the end of Feb 2, 2023)
─ Three Days Sting virus (Worldwide for at least 3 to 4 days)
─ (The Sting virus is expected at the beginning of Sept 2022)
─ Resurrection of the two prophets Moses and Elijah. (The Two Olive Trees)
─ The Great Revival about 150 days! (From Sept 5, 2022 to Feb 2, 2023)
─ (The Holy Spirit stops the Corona– and the Sting virus)
─ Death of President Joe Biden. (Heart attack?) – (Late 2022)
─ Pleasant temperatures around the world. (From Sept 5, 2022 to Feb 2, 2023)
─ There will be no more cold and heat for 5 months! (±28 degrees every day)
─ Revelation False Prophet (Feb 2, 2023)
─ ——
(The penultimate Benjamin is to be born again of the spirit) – (Mystery)
─ No more war for five months, etc. etc.
─ Donald Trump returns as President. (2022)
─ All Stock Markets Rise to the Top. Best economy of all time! (2022/2023)
─ Digital Biochip is being introduced. (Late 2022)
─ High Tech Smart “I.D. Card” is proposed and introduced.
─ The false Prophet mandates Basic Income for everyone worldwide!
─ Death of the false Prophet. (Feb 2, 2023)
─ (Feb 2, 2023) Official end of the End Time.
─ Beginning Armageddon from Feb 5, 2023!
.
Armageddon
─ The false Prophet rises from the dead after three days and becomes the Antichrist.
─ Run on Supermarkets! Within one week almost everything will be bought empty
─ Revelation Antichrist on Feb 5, 2023!
─ Beginning Armageddon from Feb 5, 2023.
─ ——
(The last Benjamin is being Born again from the spirit) – (Mystery)
─ (Feb 2, 2023) Official end of End time. Beginning Armageddon from Feb 5, 2023!
─ All Stocks are in red to almost the lowest level ever!
─ The Holy Spirit is taken away from the earth. (Feb 2, 2023)
─ Three days later: Resurrection false Prophet, who is then the Antichrist.
─ ——
─ The Antichrist goes to Israel and stands in the Temple Square!
─ After 3 weeks the Antichrist shall suddenly be expelled from Israel.
─ (The Jews see that they have been deceived. The false Prophet is not the Messiah)
─ Upon returning to Europe, the Antichrist declares war on all Jews in the whole world!
─ On the authority of the Antichrist, all Jews must immediately return to Israel!
─ There are now ±7 million Jews in Israel.
─ (Total there are ±27 million Jews worldwide!) – (Jesus gave me this number)

─ Worldwide there are ±20 million Jews who still have to return to the country of their origin.

The Logo Mark of Death No.[666]
─ The Mark No.[666] is being introduced! (Feb/March 2023)
─ Almost all Supermarkets worldwide have been emptied!
─ Donald Trump resigns because of Mark No.[666]. (Feb/March 2023)
─ ——
─ (!!!) Kamala Harris becomes president of America!
─ The Democrats take over “The House” again. (No more elections will be held)
─ End all Exchanges worldwide – Money loses its total value. (Feb/March 2023)
─ The no.[666] is introduced and thus Armageddon has officially begun!
─ Armageddon only concerns the no.[666]. The number of the Dragon.
─ The Deadly No.[666] first on a voluntary basis, then mandatory!
─ World War III breaks out! (Conventional weapons)
─ ——
─ Astroïden Impact – After three months, two Asteroids will hit the Earth.
─ The first Asteroid in the Atlantic Ocean and the second Asteroid on the City of Mecca!
─ The death of the 2 Prophets Moses and Elijah. (The Two Olive Trees) – (Apr ±1, 2023)
─ No more war for at least three weeks due to the impact of these two asteroids.
─ World War 4 breaks out! (Atomic Fire!) – (Late march 2023)
─ (Duration of war about 10 days)
─ ——
─ The Three Days of Jonah
─ (Aurora Borealis) The Sign of Jonah (From Apr ±2, 2023)
─ (Three days of colorful light show, seen by everyone, all over the world)
─ The Nuclear War ends immediately because of a big red cross in the sky!
─ A big red cross for everyone in the world to see.
─ The First Rapture – The 1st Bridal Church. (Apr 5, 2023)
─ The three Dark Days of death. (Worldwide ±2,3 billion deaths)
─ Satan kills within 48 hours(!) all those who are his. (Worldwide ±1 billion deaths)
─ All these people will be killed in their sleep. This happens immediately after the 1st Rapture!
─ The Second Rapture – The 2nd Bridal Church. (Apr 8, 2023) – (Matt 22:9-10)

─ (About 300 million Christians found by the Holy Spirit)

─ Then finally – End of Earth and the Moon – See: Nostradamus and Armageddon!

Donald Trump becomes president again
Netanyahu Becomes Again President of Israel!
Brothers and sisters, all this has yet to take place before Easter on April 9, 2023!
That could be because of the penultimate Benjamin who still has to be born again from the spirit, because that is in fact the waiting! This is a mystery that can hardly be grasped even by the Christians. The Rebirth of the Sons of God.
It is a mystery of God!

(Ephesians 6:19) “…And for me, that utterance may be given unto me, that I may open my mouth boldly, to make known the mystery of the gospel.”

The delay about one year
Jesus, the Lion of Judah, stands behind Donald Trump

With the Great Revival, Donald Trump shall be filled with the Holy Spirit.
(Joh.16:13) “Howbeit when he, the Spirit of truth, is come, he will guide you into all truth: for he shall not speak of himself; but whatsoever he shall hear, that shall he speak: and he will shew you things to come.”
Donald Trump, has not yet fulfilled the water baptism but shall be baptized during the Great Revival by the power of the Holy Spirit!
The David of God the Father will be taken up on Apr 5, 2023 with the 1st Rapture.
.
===*===
Text: New American Standard Bible (NASB) and the King James Bible

The Rapture Not in 2022 – My People Are Not Prepared