« The last year of the End Time »
Corona and the Sting virus
The Great Revival – The false Prophet
.

The earth a battlefield
Jesus: “The earth is not a place of rest and peace; it is a battlefield where Satan goes about like a roaring lion watching whom he will devour.”

See: (1 Peter 5:8) Jesus: “Be sober-minded; be watchful. Your adversary the devil prowls around like a roaring lion, seeking someone to devour.”

Update: (Febr 17, 2021)
Elections – It’s not over yet
Joe Biden has already been inaugurated and is now President of America.
But… that will not last very long.
Donald Trump is still going to win the US elections!

The first reports about the “Election Fraud” must arrive internally in January or early Feb 2021, before it is announced to the world.
The battle will ultimately be decided in Donald Trump’s favor in Feb/Mar 2021!
___
See text! Prophetic Word by Hank Kunneman.
(Jan 17, 2021) YouTube from (9:50 – 13:16)
God the Father: “Anyone who is guilty of this election fraud will be punished!”
___
See: Sadhu Sundar Selvaraj – Trump 2021 Profetie – Kim Clement
Kim Clement: “Trump shall become a Trumpet.”  says the Lord.

Jesus: “Two will have to step back!”
These two are: Joe Biden and Kamala Harris!
What a humiliation will it be on that day. It is almost certain that this will happen in the month of Feb/Mar 2021!

This Pandemic will stop overnight in April 2021 and will immediately be followed by the Sting Virus!
The Sting virus could last about three months. Because of the vision, I had first calculated 2x 10 months. But… it seems to me that it could also be five weeks!
For the time being, I still assume that the Sting virus could start somewhere in April until July 2021. Total 90 days!

As soon as the Great Revival starts, from that moment on, the Corona virus and the Sting virus will immediately cease to exist. That is due to the power of the Holy Spirit. Then, exactly one month later, in Aug 2021, the false Prophet will arise. What he will bring to the people is truly unprecedented.

(Rev 13:3b) “…and the whole earth marveled as they followed the beast.”

Time false Prophet – (Aug 14, 2021 till Jan ±14, 2022)
This world leader will rule for exactly five months in a way that people have never seen before.
The false Prophet is not yet known but the Lord has already shortened the time (3,5 years) of the false Prophet considerably. Totally three years and one month! The false Prophet only has five months left.
The five months only has to do with the fact that almost the entire world will be behind this World Leader.
Jesus: “If I do not return in time, the World, and even My people will think that it is Me.”

Jesus says of this false Prophet that such a person has not yet existed.

The moment the false Prophet will make himself known in Aug 2021, many people and nominal Christians will become confused, because this man is truly unimaginable! The world has not yet known such a person.
Jesus: “The Beast shall arise with acclaim from the world, for he will bring both peace and prosperity in a way as no one has ever experienced before.”

The last five months of 3,5 years of false peace
The false Prophet shall bring life and happiness! He has an overwhelming spiritual power and will truly come up with amazing solutions of which people have never thought of. His ideas will be truly brilliant. He will bring peace to the whole world and he will be able to solve all the problems that we humans face with ease, such as the environment, housing shortage, poverty and hunger.
He will also provide enormous employment, social and economic progress as the world has not yet seen.
It goes without saying that the Jews and the whole world will see in this man the Messiah, an unprecedented World Leader.

In fact, the End Time would have ended the moment that the false Prophet is killed, because three days later the Antichrist rises! This must happen between the 10th and 14th of Jan 2022. As soon as the Antichrist rises, Armageddon has started. However… the 1st and the 2nd Rapture will be taking place three months later on April 13 and 16, 2022.!

The End Time started from Oct 2001 and officially ends on April 13, 2022.
See distribution End time:
From Oct 2001 to Oct 2021 plus six months to April 2022 = 20,5 years.
The End Time is a time of exactly 20,5 years, during which people can still choose for the Lord in a completely free way.
In the meantime, the Holy Spirit shall take over and, in six months, brings one billion people to understanding and conversion. To this are added another 200 million people, who have NOT been found by the Holy Spirit, but due to their own (!) insights also want to belong to this group of one billion. Total 1,2 billion Christians! This will happen from July 2021 to Jan 14, 2022.
The moment the false Prophet is killed, the Holy Spirit will be taken from the earth within three days and will also no more return in the 1000-year kingdom of peace.
___
As soon as the false Prophet is killed in Jan 2022, human being shall have exactly 90 days left to gain insight and conversion, because the 1st Rapture will take place on Apr 13, 2022.

The End Time will officially end with the 2nd Rapture on April 16, 2022! After this last Rapture there is no more free will and choice and with that the meaning End Time has officially come to an end.

Valley of Armageddon
After that there is no more free will, but man will be forced to choose for the Burn Mark Sign/Logo (666) or death via the Guillotine. In other words The last 3,5 years of Armageddon has nothing to do with the End Time.

7 Fat and 7 Lean years +3+3,5 years = 20,5 years
Jesus has added 3 more years to it, extending the time.
But without the world seeing this, we have already entered the last 7 years since August 2018.
These are the last 7 years of Daniel! (Daniel 9:27)
Hardly anyone among Christians sees this. It is almost impossible to see.

The second and last 3,5 years (Armageddon) does not fall under the End Time.

Actually, the false Prophet should already have been known in August 2018. But the Lord wants to keep that time as short as possible, otherwise the whole world would think that this false Prophet is the Messiah. But when he is suddenly killed, the world is taken aback in disbelief, and their faith will be cruelly oppressed. The murder of the false Prophet makes people think and only then will people investigate the Burn Mark Sign/Logo (666).

See: The Biochip is not the Mark!

The first 3,5 years (false peace) still concerns the End Time, but the second 3,5 years (Armageddon) fall outside the total of 20,5 years of the End Time! 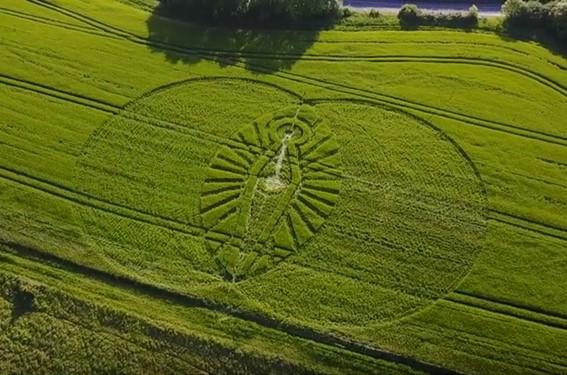 (Psalms 90:10) “The The years of our life are seventy, or even by reason of strength eighty; yet their span is but toil and trouble; they are soon gone, and we fly away.”

With the visions, the Lord has not only given me the year, but also the month of the Rapture. April 2022. We can however not determine the day nor the hour. That is impossible!
(Matt 24:36) “But concerning that day and hour no one knows, not even the angels of heaven, nor the Son, but the Father only.”
The Lord is only talking about the day and the hour here, not a month or year. Otherwise I would not have received the vision of Aug 2018 and Fiche 59 – (Dutch)
.
===*===
Text: New American Standard Bible (NASB) and the King James Bible